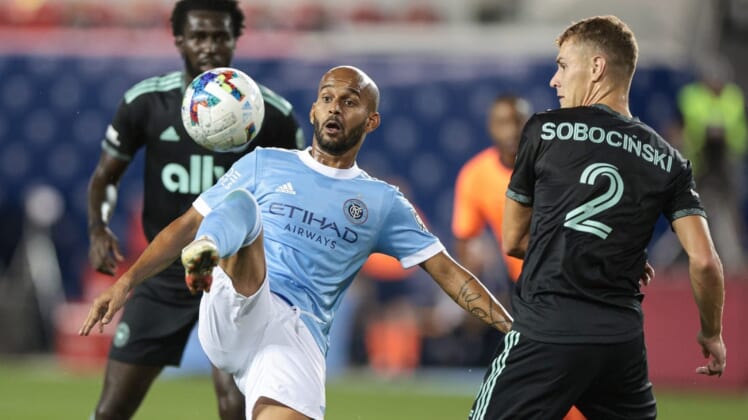 Brandt Bronico scored the tiebreaking goal and Karol Swiderski and Christian Fuchs each had a goal and an assist to help Charlotte FC post a 3-1 victory over struggling New York City FC on Wednesday night at Harrison, N.J.

Bronico’s goal came in the 77th minute and gave Charlotte a 2-1 lead. Fuchs easily found the right corner of the net on a penalty kick in the first minute of second-half stoppage time.

Swiderski scored his eight goal of the season in the first half and set up the decisive goal with a back-heel pass to Bronico.

Bronico’s first goal of the season deflected off the hand of New York City FC goalkeeper Sean Johnson. Fuchs’ goal was his third of the campaign.

Maxime Chanot scored his first MLS goal since 2018 for NYCFC (12-7-6, 42 points). The loss was the third in a row for NYCFC, and the club has allowed three goals in each of the setbacks after giving up just 21 in its first 22 matches.

NYCFC held a 14-6 edge in shots and put six on target to Charlotte’s five.

Swiderski struck in the fourth minute, but the officials initially ruled it a no-goal.

McKinze Gaines fed Swiderski, who fired a close-range left-footed shot. Johnson appeared to be inside the net and blocked it, and the ball was cleared away.

Two minutes later, a video review was called and the goal was awarded when the replays clearly displayed the ball crossed the goal line.

NYCFC’s Santiago Rodriguez sent a right-footed direct kick just high over the crossbar in the 16th minute, and then Kahlina frustrated NYCFC with two stellar saves in a three-minute span.

NYCFC finally found the back of the net in the 28th minute as Chanot received a pass about 25 yards out and unleashed a right-footed shot that sailed into the top right corner of the net.