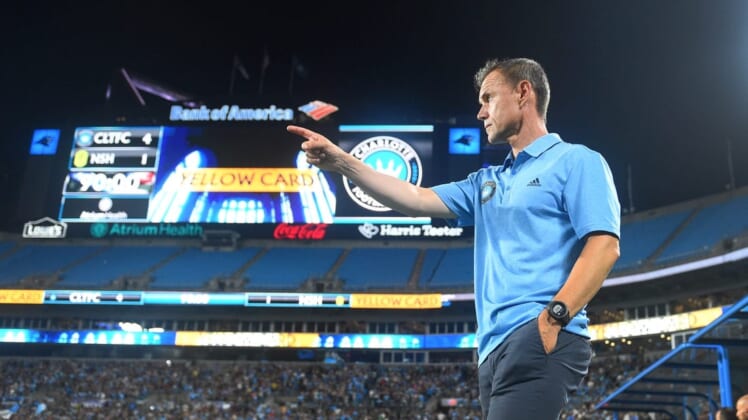 There’s no sense in messing with a method that has started to work for Charlotte FC.

“I don’t think that there is any secret formula rather than, you know, keep doing what you do to the best of your abilities, and to do it on a daily basis on the football pitch,” said interim coach Christian Lattanzio, whose club has won two straight.

Inter Miami CF meanwhile will look to alter their current course of direction when Charlotte FC visit on Saturday.

Inter Miami (6-9-4, 22 points) have posted a 1-3-1 record in their last five matches. They were close to enduring back-to-back shutout defeats prior to a goal in the 82nd minute of Wednesday night’s 2-1 loss to Philadelphia Union.

“We’ve got to respond against Charlotte,” Inter Miami coach Phil Neville said. “There’s no better way in the world when you’ve suffered defeat and you’re disappointed is get straight back on the horse.”

Gonzalo Higuain’s third goal of the season broke Miami’s scoring drought. That’s the second-highest total on the team behind Leonardo Campana (eight). Campana has scored just once in the last five matches while compiling 16 shots during that stretch.

That rate of success is rather typical of what’s going on with Miami.

“A little extra detail,” defender Chris McVey said of what he feels is required to get back on track. “We need to be a little bit more ruthless and make those chances into goals.”

Charlotte FC (8-10-2, 26 points) followed a rough stretch by winning their past two games. One of the keys for future success could be upgraded production from striker Karol Swiderski, who went 10 games without a goal before scoring last Saturday in a 4-1 victory over Nashville SC.

“If you are a striker, you need to score,” Swiderski said.

Swiderski’s five goals are tied for the team lead with forward Andre Shinyashiki, who has scored in three of the last four matches.

Charlotte FC own a 1-0 home victory against Inter Miami from May 7.

Lattanzio said there are concerns about slowing down Inter Miami in transition.