Charlie Morton will look to give Braves sweep of Astros 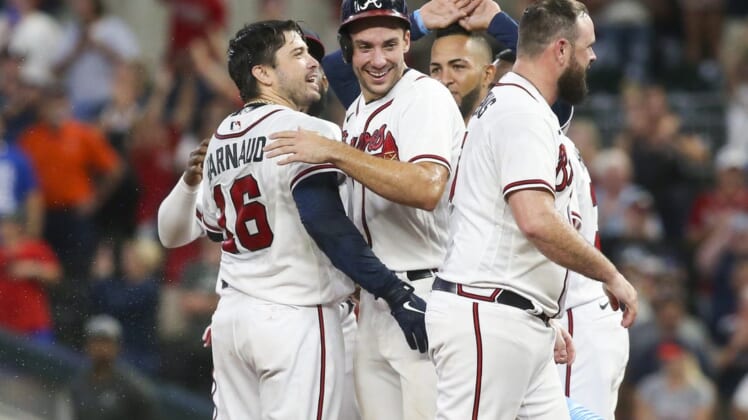 The way Charlie Morton is pitching at home, the surging Atlanta Braves could be in good shape to sweep their three-game home set against the Houston Astros.

Amid a three-game scoreless stretch at home, the 38-year-old right-hander looks to help the Braves to a 12th win over their last 13 in Sunday’s series finale against the Astros.

Morton (6-5, 4.04 ERA) is 4-1 with a 3.07 ERA in 12 home starts this season, but has been especially dominant there of late. In his last three home starts — against the Los Angeles Angels, Philadelphia and the New York Mets, Morton has allowed eight hits, five walks and hit four batters while striking out 27 over 19 1/3 scoreless innings.

During Tuesday’s 5-0 win over those NL East-leading Mets, Morton yielded three hits and a walk, while matching a season high with 12 strikeouts, over 6 2/3 innings.

“It’s hard to prepare for somebody when they are throwing 96 and knowing exactly where it is going,” Braves catcher Travis d’Arnaud said of the seemingly ageless Morton.

“Then, you have the devastating breaking ball, and add his slider, cutter and changeup.”

Morton started Atlanta’s 6-2 victory at Houston in Game 1 of last year’s World Series. He lasted only 2 1/3 innings, but yielded just a hit and two walks while striking out three before exiting with his team up 5-0.

The Braves have continued their success over the Astros this weekend. After winning 6-2 on Friday, they rallied for a 5-4, 11-inning victory to improve to 11-1 after losing five of six.

Promising infielder Vaughn Grissom continued the stellar start to his big-league career by homering for the third time Saturday. Grissom is batting .385 with eight RBIs in 11 career contests.

While the Braves are rolling at the moment, they could be in for a serious test against scheduled Houston starter Jose Urquidy (11-4, 3.69 ERA), who is 3-0 with a 2.66 ERA in his last six road starts.

The right-hander has yielded a run in each of his last two away from home. Most recently over 7 2/3 innings, while also giving up six hits, but no walks, during Houston’s 4-2 loss against the Chicago White Sox on Monday.

This will be Urquidy’s first regular-season start against the Braves, however, he went 2-0 with a 3.00 ERA in two outings — one start — during the 2021 World Series. D’Arnaud, who delivered the game-winning single in the 11th on Saturday, went 3-for-3 with a homer against Urquidy during the Fall Classic.

Houston hopes to have slugger Yordan Alvarez back in the lineup Sunday after he sat out Saturday’s contest. Alvarez left Friday’s opener with reported shortness of breath and was taken to an Atlanta-area hospital. Astros manager Dusty Baker said doctors did not find anything that appeared to be wrong with Alvarez, who leads the team with 31 homers and has 77 RBIs.