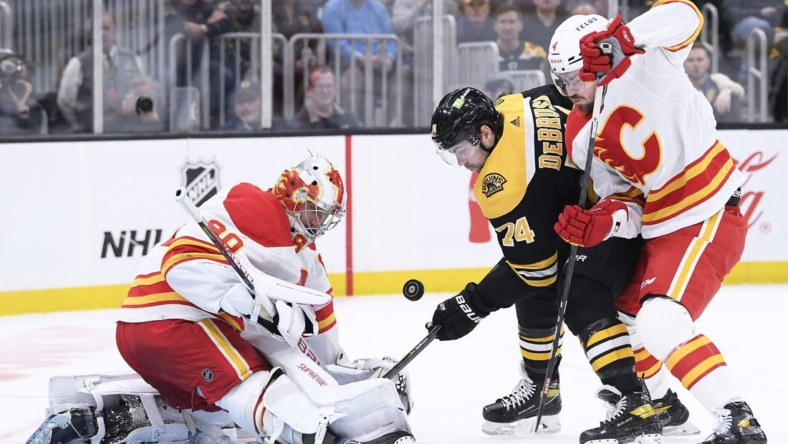 Charlie McAvoy scored the game-winning goal in his first game of the season as the Boston Bruins defeated past the visiting Calgary Flames 3-1 on Thursday night.

David Pastrnak had a goal and an assist, and Connor Clifton also scored for the Bruins, who have won back-to-back games since their seven-game run ended last weekend.

Boston is 8-0-0 at home, matching the best home start to a season in franchise history.

Eighteen players have now lit the lamp for Boston this season.

Linus Ullmark became the first goaltender to earn 10 wins this season, making 31 saves including at least 10 in the first and third periods.

Massachusetts native and former Boston College defenseman Noah Hanifin tallied for Calgary, which is 0-5-2 since a win on Oct. 25.

The Flames had plenty of chances to break that streak, as they finished 0-for-6 on the power play and had a 32-28 shots advantage.

The Flames scored first when Hanifin sent a point shot through traffic and past Ullmark just 4:43 into the contest.

Boston didn’t register a shot on goal until after going on the power play at 8:08, and it tied the game with 3:22 left in the opening period. Clifton followed up his own shot below the right circle after taking a cross-ice feed from Tomas Nosek.

The Bruins caught up and finished the first stanza even in shots at 13-13, but the game remained tied thanks to Vladar’s stellar work in goal.

Vladar wasn’t tested for nearly half of the second period as Boston’s first shot came on a David Pastrnak one-timer at 9:38. The frame came to an end with the Bruins ahead 2-1 on McAvoy’s goal.

Ullmark’s time to step up came in third as he made a flashy glove save on Adam Ruzicka’s wrister at 5:52, less than three minutes before his team killed another penalty.