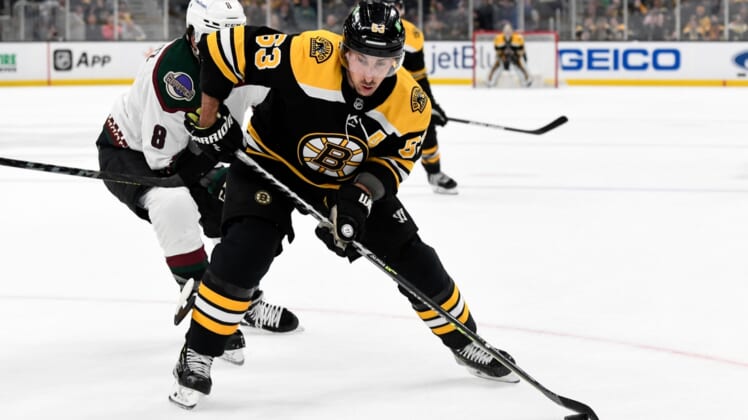 Charlie Coyle scored the go-ahead goal with 3:21 left and also had an assist to lead the host Boston Bruins to a 3-2 victory over the Arizona Coyotes on Saturday night.

Coyle rushed up the ice on a two-on-one break with Craig Smith and backhanded a shot from the left circle inside the near post for his 14th goal of the season and the game winner.

Smith scored two goals, the 23rd two-goal game of his career, and Jeremy Swayman made 26 saves as the Bruins who improved to 9-1-1 in their last 11 games.

Clayton Keller scored his 25th goal of the season and Nick Ritchie also scored for Arizona, which has had its season-best four-game win streak snapped. Karel Vejmelka finished with 37 saves.

Boston took a 1-0 lead at the 2:33 mark of the first period when Smith buried a rebound of a Tomas Nosek shot from the left side of the goal.

Smith made it 2-0 midway through the period with his 13th goal of the season and seventh in five games. Coyle got the primary assist on the play with a pass from the left boards to Smith in the slot. Smith’s first shot attempt was blocked but he followed up and drove in the rebound past Vejmelka’s blocker side.

Keller cut it to 2-1 just before the buzzer at the end of the second period with a one-timer from the middle of the right circle that went under Swayman’s right pad and inside the far post. Replays showed the puck crossed the goal line with just 0.6 seconds left.

Boston had a chance to extend its lead early in the third period when Brad Marchand had a wide-open net. However, defenseman J.J. Moser reached out with his stick and deflected the shot over the goal.

Arizona then tied it 45 seconds later when Ritchie drilled in a rebound of a Barrett Hayton one-timer for his sixth goal of the season. Ritchie had a chance to give Arizona the lead a few minutes later but his backhand try from the slot hit the left post.