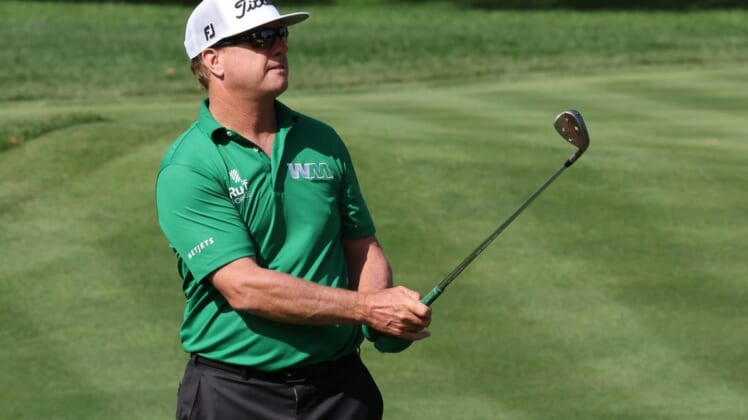 After making his lone bogey of the day at the 17th hole, Charley Hoffman closed with a birdie on the 18th hole to grab a share of the lead after the first round of the Barracuda Championship in Truckee, Calif.

Hoffman had three birdies on the front nine and three more on the back nine before his bogey-birdie finish.

“I got off to a good start and made some birdies early,” Hoffman said in a postmatch interview on Golf Channel. “I hit a lot of green. Gave myself a lot of opportunities and made some putts. Was never out of positive to really struggle a ton. …

“I’m happy with where I’m at and hopefully I can keep it going the next few days.”

Hoffman, 45, has four career PGA Tour wins, the most recent one coming at the 2016 Valero Texas Open.

Hubbard also made his lone bogey late, at No. 16, after racking up seven birdies, including a pair on the first two holes.

“This format frees you up. Bogeys are worth less so you can be a little bit more aggressive,” Hubbard said on Golf Channel. “I tried to do that today and fired at the pins when I had good yardages.”

The Barracuda Championship, co-sanctioned by the PGA Tour and the DP World Tour, is an alternative-field event running concurrently with the Open Championship.