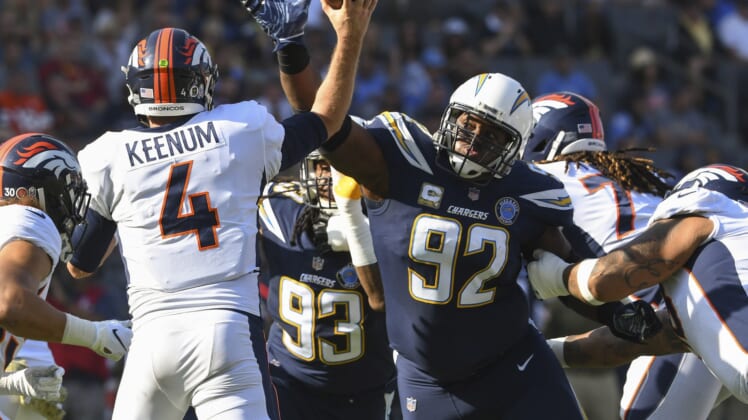 As the Los Angeles Chargers continue to battle on the field defensively, the team may continue to be without defensive tackle Brandon Mebane as his newborn daughter fights against a stomach illness and heart defect.

The #LAChargers prepare to face the #Bengals without @Melvingordon25 Today HC Anthony Lynn also confirmed Brandon Mebane is listed as doubtful after returning home to be with his family & ailing newborn daughter. Sending our thoughts & prayers to the Mebane Family. @nflnetwork pic.twitter.com/6YqbqpWd2u

Mebane revealed that his newborn daughter, Makenna, who was born a month earlier than expected on Nov. 12, is dealing with a stomach illness called necrotizing enterocolitis and she also has a heart defect called trisomy 13.

Mebane, who was praised for his leadership in the locker room by head coach Anthony Lynn, shared the details of Makenna’s illness.

“The thing we were dealing with recently with my daughter was she had developed a stomach infection,” he explained, via Chargers.com “This sometimes happens when babies come out premature. My daughter, she wasn’t supposed to be born until December 16. She came November 12 of this year. She was fine for a couple of weeks, for two weeks, and then she got sick with (her) little stomach intestines. They call it NEC (Necrotizing Enterocolitis). Basically, the baby swells up and all kinds of things happen. Her blood was low. They had to get her blood counts and all kinds of medicine to help her recover.”

While the stomach illness is being treated, the family still must wait several months before their daughter even has a chance to

“Basically, what the ultrasound (showed in July was) my daughter has T13,” he said, via Chargers.com “T13 is when you’re dealing with a heart condition and the baby doesn’t have a valve to her heart. (There are) not a whole lot of surgeons in the United States to do surgery on babies, so we had to go to a specialist. There are only like four doctors in the U.S. that do this (certain procedure). One of the doctors is in Omaha, so we had to go out there.”

Mebane’s daughter remains in the neonatal intensive care unit as she continues to receive treatment. The family is hoping they will start to see more improvement from her and steps forward in the coming weeks.

Our thoughts and prayers for best wishes are extended for Mebane’s family and his daughter.