Chandler Smith is listed as the driver of the No. 26 car for Sam Hunt Racing at Talladega and Dover in the NASCAR Xfinity Series. 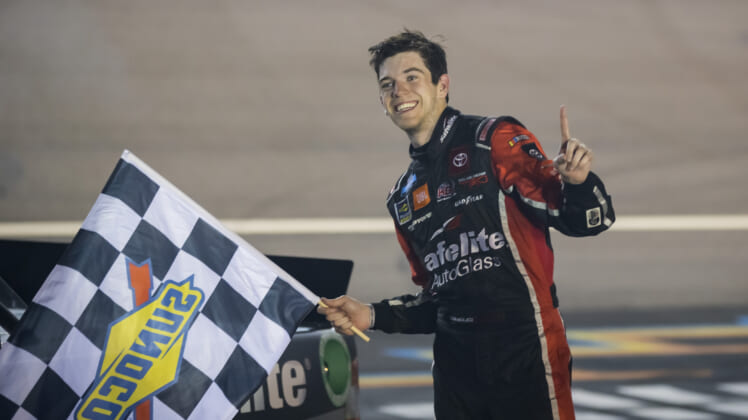 Chandler Smith is currently listed as the driver of the No. 26 car for Sam Hunt Racing in the NASCAR Xfinity Series races at Talladega Superspeedway and Dover Motor Speedway, per the roster portal.

Smith, 19, drives the No. 18 truck full-time for Kyle Busch Motorsports in the NASCAR Truck Series and currently sits in second place behind Ben Rhodes in the point standings.

The driver of the No. 18 truck has one victory, three top-5 finishes, four top-10 finishes, and a series-best 7.4 average finish. Smith’s lone victory came in the second race of the year at Las Vegas Motor Speedway over Zane Smith and team owner Kyle Busch.

Smith has also won three of the last 10 events and remains one of the hottest drivers in terms of performance during the start of the 2022 season.

Chandler Smith has been regarded as one of Toyota’s most prized young talents after dominating in the lower ranks of racing, including the ARCA Menards Series.

Smith has won many prestigious events in 2021, such as the Snowball Derby, and the finale of the NASCAR Truck Series season at Phoenix Raceway.

The 19-year-old driver has been touted as one to watch moving forward in his development and sits as the No. 3 ranked prospect in Sportsnaut’s list of NASCAR’s best prospects.

The 2022 season marks Smith’s second season with Kyle Busch Motorsports in the Truck Series and a career year could give him the ability to leap into the Xfinity Series next year.

Sam Hunt Racing would give Smith a chance to be competitive in his two scheduled Xfinity Series races at Talladega and Dover. The No. 26 car sits in 15th place in the Xfinity Series’ owner points.

If the Smith and Sam Hunt Racing alliance proves to be true, it will give both sides of the equation a great chance at developing in the Xfinity Series.