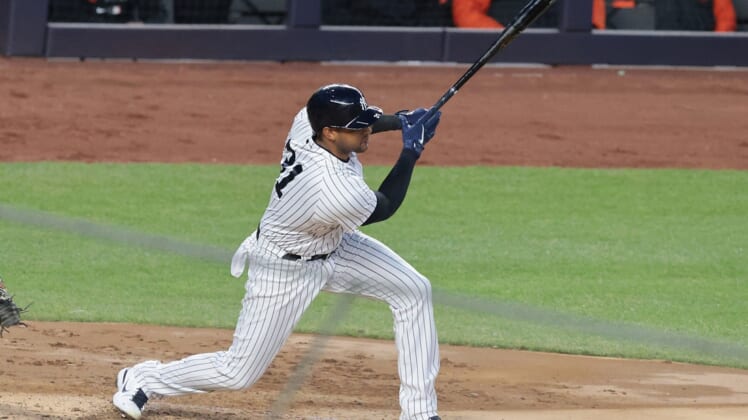 Designated runner Rio Ruiz scored on a bloop single by pinch hitter Chance Sisco with one out in the 11th inning as the Baltimore Orioles ended a 12-game road losing streak to the New York Yankees with a 4-3 victory Wednesday night at Yankee Stadium.

Freddy Galvis sacrificed Ruiz to third and Cisco dropped a single off Chad Green (0-1) in front of left fielder Brett Gardner to give Baltimore a 4-3 lead. Cisco’s hit prompted chants of “This Rule (Stinks)” and “Play Real Baseball” from some fans in the limited crowd of 10,254.

After Baltimore went ahead, Paul Fry recorded his sixth career save with a major assist from right fielder Anthony Santander who threw out designated runner Gio Urshela on a fly ball by DJ LeMahieu.

Both teams pushed across a run in the 10th with their designated runners.

Baltimore took a 3-2 lead when Santander easily scored from third on a throwing error by New York shortstop Gleyber Torres.

The Yankees tied the game when Tyler Wade, who was running for Giancarlo Stanton, beat Santander’s throw from right field on a single by Kyle Higashioka off Cesar Valdez.

Baltimore won a road game over the Yankees for the first time since March 31, 2019 after blowing a 2-1 lead with two outs in the eighth.

Urshela hit a game-tying double in the eighth off Shawn Armstrong but the Yankees stranded runners at first and third.

Cedric Mullins and Santander homered in the fourth for the Orioles, who had matched their longest road losing streak to the Yankees going back to their time as the St. Louis Browns through 1953.

New York’s Jameson Tallion, who is coming back from a second Tommy John surgery, allowed two runs on four hits in 4 2/3 innings. It was his first start since May 1, 2019.

Aaron Hicks drove in New York’s first run in the third with an RBI single off John Means — the last Baltimore winning pitcher in New York.

Means allowed one run on seven hits in 4 2/3 innings. He struck out four, issued two walks and kept the Yankees off-balance with an effective changeup at times.

The left-hander allowed one run or less in his sixth straight start, dating to last season. He tied the team record set by Hall of Famer Jim Palmer in 1978.