The eight-time All-Star will kick off the Dodgers' efforts in the best-of-seven series as the starting pitcher in Game 1 on Tuesday. 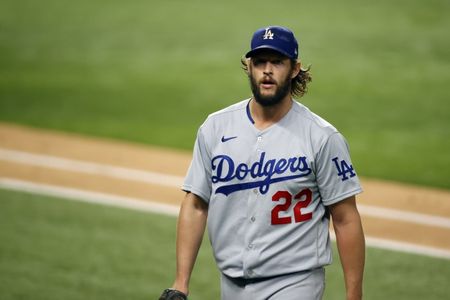 (Reuters) – Three-time Cy Young Award-winner Clayton Kershaw said a chaotic year punctuated by a protracted post-season did little to diminish the luster of a World Series crown, as his Los Angeles Dodgers prepare to take on the Tampa Bay Rays in the Fall Classic.

The eight-time All-Star will kick off the Dodgers’ efforts in the best-of-seven series as the starting pitcher in Game 1 on Tuesday, capping a season that once appeared in doubt due to the COVID-19 pandemic and enduring amid a super-sized, 16-team playoff field.

“You know, the post-season’s been in some aspects a little harder with the extra round and things like that, it’s been a little bit more of a crapshoot with 16 teams making the post-season,” said the 32-year-old lefty.

“It’s been a tough go, facing different teams in different bubbles and different things like that,” Kershaw told reporters on Monday. “So to be able to win a World Series after all this would be just as special as any other one, for sure.”

Kershaw, who has spent his entire 13-season career in Los Angeles, has twice seen World Series glory slip through his fingers, with the Dodgers losing to the Boston Red Sox in 2018 and the Houston Astros in 2017.

The 2017 loss has almost certainly stung more in the wake of the Astros’ sign-stealing scandal, and the Dodgers were denied a chance at revenge after the Rays ended Houston’s run in a seven-game ALCS saga.

But Kershaw said that the team was focused firmly on the future.

“Twenty-seventeen is over, we can’t go back and worry about that,” he said. “All to say, this World Series against the Rays is what we’re prepared for now.”