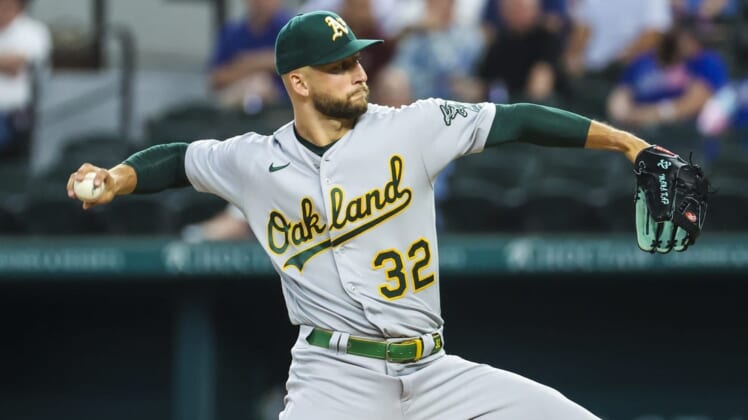 Chad Pinder put an exclamation point on an eight-run 12th inning with a grand slam and the Oakland Athletics outlasted the Texas Rangers 14-7 on Tuesday in Arlington, Texas.

Pinder actually started the 12th inning as the designated runner, and he scored twice in the breakthrough frame while having one at-bat. The grand slam came off Kolby Allard.

The A’s bounced back from a 10-8 loss on Monday to split the first two of the three-game series that concludes on Wednesday.

Kirby Snead (1-0) picked up his first major league win after recording two key strikeouts in the 11th with the potential winning run at third.

With the game tied 6-6 in the 12th, the A’s grabbed the lead off Dennis Santana (3-4), who was working his second inning. Pinder took third on Sam Huff’s passed ball. Nick Allen drew a walk, and Vimael Machin lifted a sacrifice fly to left to out Oakland in front.

Ramon Laureano ripped an RBI single to center, and after an intentional walk, Dermis Garcia contributed an RBI double for his first major league hit. Following two walks and a popout, Pinder hit a first-pitch fastball out to left-center.

Texas scored in the bottom of the 12th on Josh H. Smith’s RBI single off Austin Pruitt, who avoided any further damage.

Marcus Semien and Corey Seager homered for the Rangers.

Texas extended the game in the 10th inning with Semien’s two-out, RBI double off Zach Jackson evened the score at 6.

The A’s had grabbed the lead in the top of the 10th on Sean Murphy’s RBI single to right field off Brett Martin, scoring Machin from second.

Murphy had a four-hit game, including two doubles. He added two RBIs, two runs and a run.

The A’s carried a two-run lead into the ninth inning, but the Rangers rallied off Lou Trivino. Seager homered to lead off the inning, and with two outs, Leody Taveras doubled and scored the tying run on Kole Calhoun’s RBI single.

Just two batters into the bottom of the first inning, the Rangers grabbed the lead on Semien’s two-run homer off A’s starter James Kapriellan.

The game went back-and-forth after that.