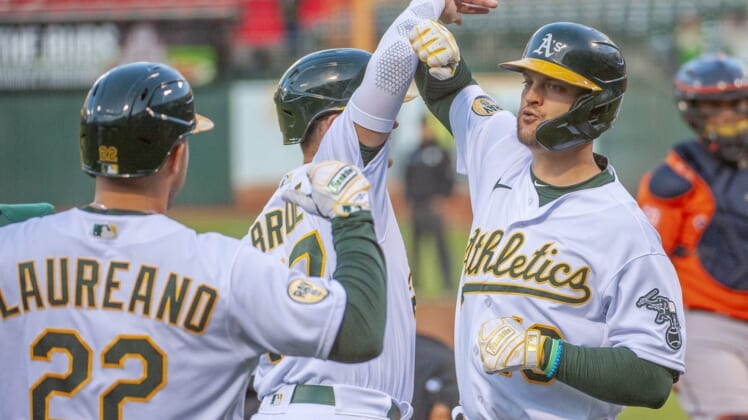 Chad Pinder’s grand slam gave Oakland an early lead and Frankie Montas worked five innings for his first win since June 11 as the host Athletics made it two in a row over the American League West-leading Houston Astros with a 5-3 victory on Tuesday.

Four Oakland relievers combined for four perfect innings, allowing the A’s to win for the fifth time in their past six games.

Kyle Tucker homered for the Astros, who out-hit the A’s 7-6 but failed in an uphill climb after Pinder’s third-inning blast.

With a man on first and two outs in the third inning, Houston’s Luis Garcia (8-6) walked Ramon Laureano and Sean Murphy consecutively to set the stage for Pinder, whose grand slam was the fourth of his career and second this month.

He also connected off the Texas Rangers’ Kolby Allard on July 12. The Tuesday homer was Pinder’s ninth of the season.

Tony Kemp added an RBI double in the eighth to provide the Oakland bullpen an insurance run after the Astros crept within 4-3.

Tucker’s homer, his 19th of the season, got Houston on the board in the fourth. The Astros cut the deficit to one on a Yordan Alvarez RBI double and a run-scoring error by A’s third baseman Vimael Machin in the fifth.

Montas (4-9) got Aledmys Diaz to fly out with two aboard to end the fifth, then was pulled, having allowed three runs (two earned) and seven hits. He walked three and struck out four.

Austin Pruitt, Sam Moll, Zach Jackson and Lou Trivino took over from there, combining for four strikeouts among the 12 consecutive outs they recorded. Trivino notched his 10th save with a 1-2-3 ninth.

Stephen Piscotty had two doubles and scored a run for the A’s, who improved to 5-6 against the Astros this season.

Alvarez went 2-for-3 for the Astros, who had won five straight before losing in Oakland on Monday and Tuesday.