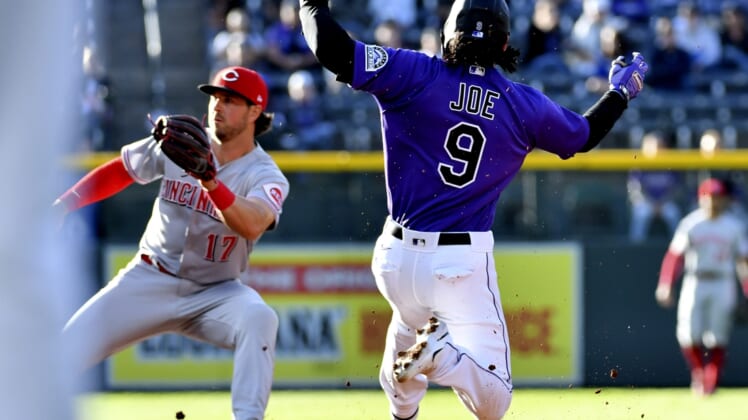 Ryan McMahon had two hits, including a two-run triple, Chad Kuhl pitched strongly into the eighth inning, and the Colorado Rockies beat the struggling Cincinnati Reds 4-3 in Denver on Saturday night.

Daniel Bard pitched the ninth for his sixth save for Colorado.

Tyler Naquin and Aramis Garcia homered for Cincinnati, which has lost five in a row and 18 of its last 20.

Naquin got the Reds off to a fast start when he homered on the first pitch of the game. Kuhl (3-0) settled down and retired 12 straight batters to keep it a 1-0 game, but the Reds mounted a rally in the fifth inning.

Brandon Drury, Nick Senzel and Mike Moustakas began the inning with consecutive singles to load the bases. Kuhl got Garcia to ground to third base for a double play that allowed Drury to score from third.

Kuhl then got Jake Fraley to fly out to center to limit the damage to one run.

Cincinnati starter Connor Overton, whose contracted was selected from Triple-A before the game, kept Colorado off the board with some defensive help from his catcher. Garcia threw out Connor Joe on a steal attempt in the first and picked off Dom Nunez in the third.

The Rockies finally broke through in the sixth. Alan Trejo led off with a single, and after Nunez popped out, Art Warren (0-1) relieved Overton. Warren walked Joe and then gave up an RBI double to Charlie Blackmon.

Joe scored on the play when Fraley’s relay throw from right field went through the infield for an error.

Randal Grichuk walked, and after C.J. Cron popped out, McMahon followed with a stand-up triple to put Colorado ahead.

Overton allowed one run on three hits in 5 1/3 innings. He walked two and struck out three.

Kuhl got the first out of the eighth inning before Garcia hit his first homer of the season to cut the lead to one run. Tyler Kinley came on and got the final two outs.

Kuhl allowed three runs on five hits in 7 1/3 innings, with four strikeouts and no walks.