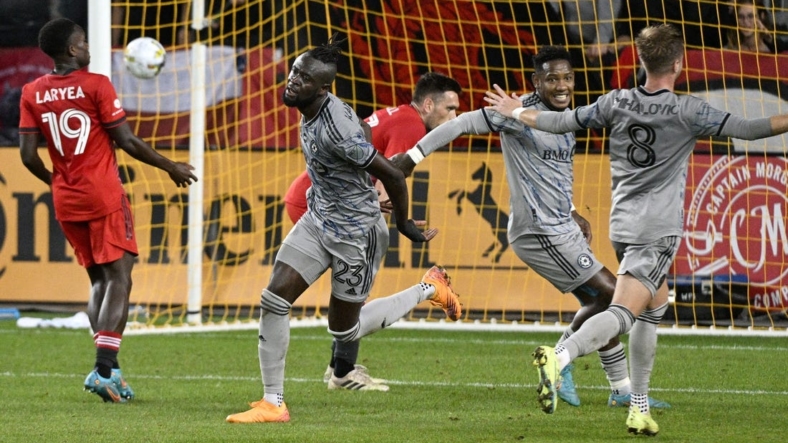 CF Montreal scored four unanswered goals to rally for a 4-3 win against host Toronto FC in the Canadian Classique on Sunday.

Toronto (9-14-7, 34 points) has just one win in its past five games. Lorenzo Insigne scored twice for Toronto.

The Reds took a 2-0 lead with a pair of early strikes.

After video review confirmed a penalty for Toronto in the fifth minute, Federico Bernardeschi converted from the spot to give the home side a 1-0 lead. The Italian international has seven goals in nine matches with Toronto, including one in each of the club’s five home games since his arrival.

With smoke fog from the tally still covering the pitch, Insigne doubled the lead two minutes later, taking a volley pass from Bernardeschi inside the box and getting his right foot up to direct it into the net.

Montreal struggled to get shots on target early on but finally connected in the 19th minute. Moments after Kei Kamara’s shot from the top of the box was stopped by goalkeeper Alex Bono, Kamal Miller got his foot on the rebound at the top of the goal area to cut it to 2-1.

Djordje Mihailovic brought the visitors level in the 21st minute when he struck from above the penalty arc.

Kamara put Montreal ahead 3-2 in the 43rd minute. The 38-year-old took a long feed from Joel Waterman along the right side and beat Chris Mavinga to the ball before getting inside on the Toronto defender and slipping the ball under Bono’s left leg short side.

Alistair Johnston pushed it to 4-2 in the 54th minute when he headed in a Kamara header pass off a cross from Romell Quioto.

Insigne narrowed it to 4-3 in the third minute of second-half stoppage time, sending one from the corner of the goal area over goalkeeper James Pantemis.