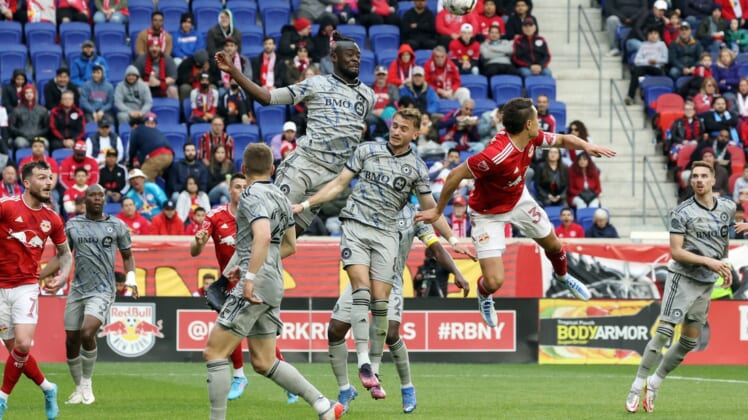 Substitute Romell Quioto took advantage of a defensive miscommunication to score the game-winning goal in the 81st minute as visiting CF Montreal stormed from behind for a 2-1 win over the New York Red Bulls on Saturday afternoon.

Rudi Camacho scored the equalizer 10 minutes earlier for Montreal (2-3-1, 7 points), which won its second in a row despite chasing the high-tempo Red Bulls for long stretches of the match.

Camacho also had an earlier key involvement, when he accidentally deflected Omir Fernandez’s 24-yard strike from distance over the head of goalkeeper Sebastian Breza to open the scoring in the 14th minute.

But Breza made three saves to keep Montreal in the match. Quioto entered the game in the 61st minute to help spark a comeback that led to the visitors’ first back-to-back wins this season.

But he and defender Tom Edwards shared the blame for Quioto’s winner and a defeat that leaves New York (3-2-1, 10 points) with only one point in three home games.

It came from a seemingly harmless loose ball about 40 yards from goal.

With neither New York player taking control, Quioto did so instead, raced into open space and then sent a composed finish into a completely open goal from the edge of the penalty area.

Camacho headed the visitors in front when he found a pocket of space near the 6-yard box and headed Alistair Johnston’s cross from the right past Coronel and off the inside of the left post.

Fernandez opened the scoring after a nice sequence of one-touch passing from the hosts. Luquinhas provided the final pass for Fernandez, who dribbled toward the top of the penalty arc and then unfurled a shot that deflected off Camacho and over Breza.

The Red Bulls might’ve made it easier on themselves before Montreal’s fightback. But Kei Kamara made two goal-line blocks in quick succession in the 26th minute. And shortly after halftime, Luquinhas sent the Red Bulls’ best look of the second 45 minutes wide of the right post.