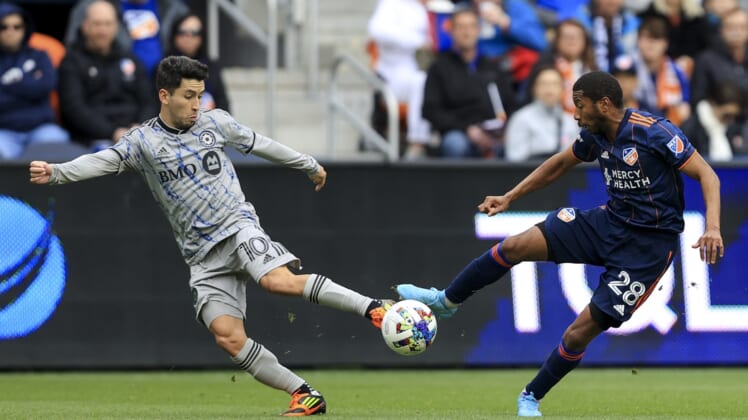 Joaquin Torres recorded the tiebreaking goal in the 67th minute and Djordje Mihailovic netted a first-half brace as visiting CF Montreal finally recorded their first win of the season, 4-3 over FC Cincinnati on Saturday.

Cincinnati (2-4-0, 6 points) was down 3-2 when a streaking Alvas Powell was tripped in the box by Montreal’s Rudy Camacho. Luciano Acosta stepped up to the spot and nicely drilled the ball into the net just past the hour mark to level the match.

But six minutes later, Torres tapped in a cross from Kei Kamara — which pierced off the hand of diving Cincinnati goalkeeper Alec Kann — to put Montreal ahead with his first goal of the season.

Kamara also scored for Montreal (1-3-1, 4 points), which won for the first time in three tries at Cincinnati.

Brandon Vazquez scored his fifth goal of the season for Cincinnati, which was trying to win consecutive home games for the first time in club history. However, this rough defensive showing led to a second straight defeat.

Following a 10-minute feeling-out between the two squads, Vazquez put Cincinnati on top in the 12th minute. While being marked, Powell took the ball down to the Montreal end line, then crossed a pass into the box. Montreal goalkeeper Sebastian Breza (five saves) deflected right to Vazquez, who hesitated before delivering the successful finish.

Montreal equalized in the 17th minute when Mihailovic curled the ball into the right middle corner of the Cincinnati net. But just three minutes later, Montreal gave the lead right back to FCC when Vazquez’s up-close cross in front of Breza deflected off the foot of the visitors’ Alistair Johnston for an own goal.

Mihailovic, though, completed his brace in the 41st minute. Untouched in the box, Mihailovic stood in the middle of the box, took a pass from Kamara and blazed the ball by a late-reacting Kann.

By the end of the first half, Montreal held a one-goal lead after Kamara stayed on-side to retrieve the ball, break in and beat a sliding Kann in the initial minute of first-half stoppage time.