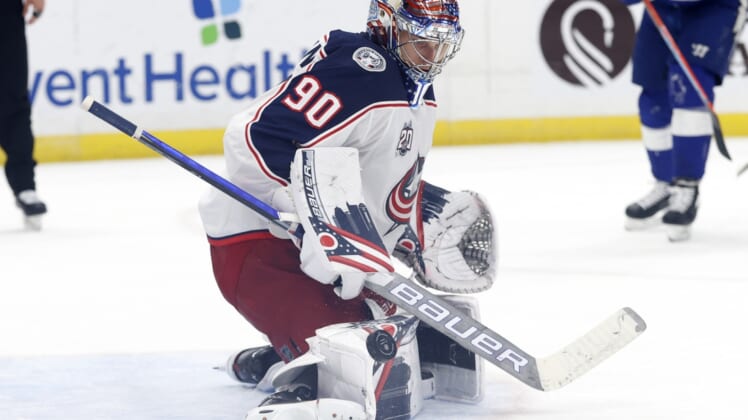 The 26-year-old Latvian made 37 saves, including 20 in a busy second period, as Columbus won 3-1 in Tampa Bay to break a four-game losing streak and hand the Lightning just their third home loss this season.

In winning in the opponents’ first meeting in Tampa this season — they hadn’t played each other since Jan. 23 — the Blue Jackets moved to 2-0-1 against the Lightning. The Central Division foes will face off again Thursday night in Tampa Bay.

After two regulation losses against the Red Wings, Tortorella characterized his side’s play early in the third game against the Lightning on Tuesday as “nervous.” Columbus didn’t generate a shot on goal until half of the first period had expired.

In saying his team was closer to playing the right way — “I think we took a step in the right direction,” Tortorella said — the coach gave credit to Merzlikins for calming the squad, especially as the Lightning fired at will in the middle 20 minutes.

“That was a key part of the game,” Tortorella said. “We were losing faceoffs and icing the puck. They kind of took over there. I think the way he played helped settle the team down. It wasn’t craziness; he just settled us down and found the puck in traffic. I thought we did a good job on rebounds and around the net.”

Merzlikins added that it didn’t take much game time to notice a difference in his teammates once the puck was dropped.

“(About) one minute,” the second-year goalie said. “We played much better, obviously. I think the great thing was the day off (Monday), especially after the bad weekend we had. We had to clear our minds.”

After one No. 1 defenseman in the division went down over the weekend — Florida’s Aaron Ekblad in Dallas on Sunday because of a leg injury — coach Jon Cooper and his Lightning watched top blueliner Victor Hedman bang awkwardly into the end boards and limp off the ice in the second period while being supported by training personnel.

However, the 2018 Norris Trophy winner was off the ice only briefly and finished the game after a short time in the dressing room.

“We didn’t know what was wrong,” Lightning captain Steven Stamkos said. “It didn’t look good on the ice when we were talking to him.”

With defensemen Ryan McDonagh and Erik Cernak out for a week because of injuries, plus Jan Rutta getting hurt early in Thursday’s game, Tampa Bay was facing the prospect of playing short-handed during its comeback bid if Hedman didn’t return.

“I didn’t like the fact we might be going down to four D for at least half of the game,” said Cooper, who might have to call up a defenseman from the taxi squad for Thursday. “It ended up being a scare. Thank goodness it was just that.”

The Lightning slipped to 13-3-0 at home and lost their third straight game for the first time this season.

The league’s top-scoring defenseman, Hedman — 33 points on six goals and 27 assists — was held without a point for the third consecutive game.

Tampa Bay defenseman Ryan McDonagh is nearing a return after missing the past four games because of a lower-body injury.

For Columbus, Oliver Bjorkstrand, who shares the team lead in goals with Cam Atkinson with 13 apiece, missed Wednesday’s practice due to a non-COVID-19 illness.