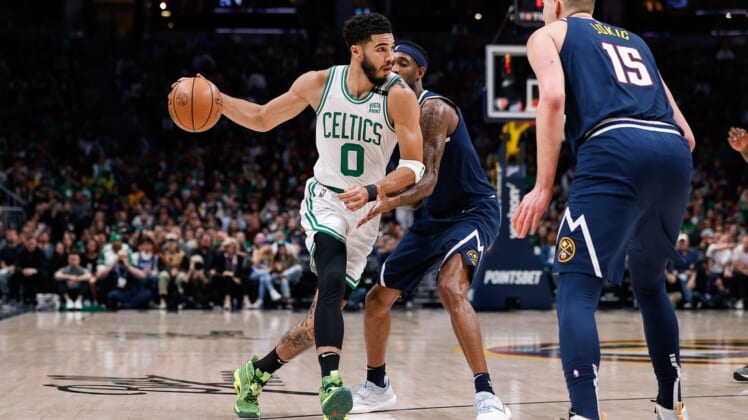 After sweeping a four-game road trip, the Boston Celtics keep their attention on the Western Conference as they return home to clash with the Utah Jazz on Wednesday night.

Boston dominated its most recent stretch with victories over Golden State, Sacramento, Denver and Oklahoma City. The Celtics won the first three games by at least 20 points and beat the latter pair of opponents during a back-to-back on Sunday and Monday.

A 132-123 win over the Thunder capped the trip and, with nine games to play in the regular season, the Celtics are suddenly in contention for top-seed status in the Eastern Conference. Through Monday’s games, Boston is in a virtual three-way tie for second with Philadelphia and Milwaukee, just 2.5 games behind Miami in the East.

“We can’t be comfortable with it,” Grant Williams told The Boston Globe after recording his first career double-double with 20 points and a game-high 10 rebounds. “It’s one of those things where we know no matter what seed we are, we’re going to be playing a good team, so we’ve done a great job bouncing back, and just got to continue that perseverance throughout the rest of this year and throughout the playoffs.”

Both Jayson Tatum (36 points) and Jaylen Brown (25) reached the 25-point mark for the fourth consecutive game in Oklahoma. Before the game, Tatum was named Eastern Conference Player of the Week for the second time this month.

“I think that we have proven ourselves right in terms of just having confidence, in terms of being there for one another,” Williams said. “I feel like this team is growing closer and closer every single day.”

Celtics coach Ime Udoka said he doesn’t expect any of the injuries to be long term. Boston winds up a seven-game stretch against Western Conference teams Sunday night when they host the Minnesota Timberwolves.

Utah had a three-game win streak snapped Monday in a 114-106 setback in Brooklyn.

“Our offense didn’t help our defense tonight,” Jazz coach Quin Snyder said. “We didn’t seem to have the energy that we needed trying to get out and run.”

All-Star Donovan Mitchell, who scored 36 points against New York a night earlier, had a team-high 30 in the most recent setback. With Utah trailing by 21 points with six minutes to play, he scored 10 points in the next five minutes to help the Jazz to within six before the Nets held on.

“That last little couple minutes of the game, it seemed like we were all over the place. Guys were finding people, we were getting to the free-throw line,” Mike Conley said after recording 18 points, seven assists and two steals. “We have to have that kind of energy and urgency earlier in moments in the game, especially when they make little 6-0 runs, 7-0 runs in the second or third quarter, and be able to nip them in the bud.”

Mitchell scored 34 to lead the Jazz in their only other meeting with Boston, a 137-130 win in Salt Lake City back on Dec. 3.