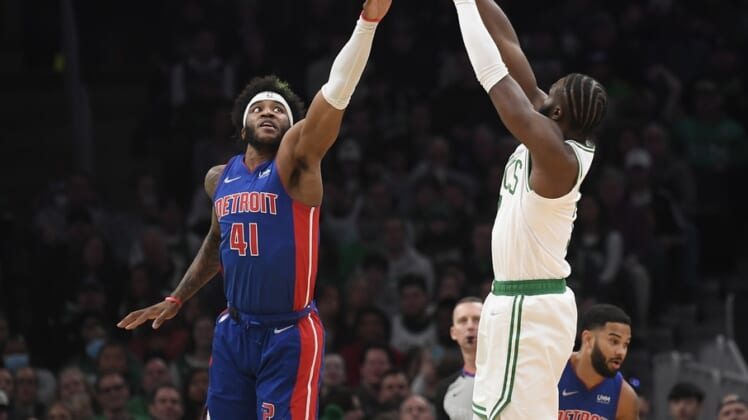 Jayson Tatum scored 31 points Friday as the Boston Celtics rode a dominant fourth quarter to a 114-103 win over the visiting Detroit Pistons.

Boston expanded its 92-90 lead with seven straight points to begin the fourth. Al Horford capped the run with back-to-back buckets that forced a Detroit timeout with 9:44 left.

Tatum’s step-back 3-pointer and a Payton Pritchard jumper at the 6:53 mark put the hosts ahead by double digits for the first time, 104-94.

Boston didn’t allow a field goal in the fourth quarter until there were 30.2 seconds left in the frame. It held a 22-13 scoring edge in the period.

Cade Cunningham had a team-high 27 points for the Pistons, who have lost back-to-back games following a 6-2 stretch. Jerami Grant and Marvin Bagley III each scored 20 for Detroit.

The Celtics used a 10-3 run to take their first lead at 14-13. Tatum finished the stretch with a drive and dunk with 6:29 left in the first.

A quick response lifted Detroit to a 23-19 lead at the four-minute mark, but the edge closed to 34-32 by quarter’s end. Cunningham had 13 points on 5-of-9 shooting and Grant hit a pair of 3-pointers in the opening 12 minutes as the Pistons shot 50 percent from the field.

Boston shot 10 of 17 and held a 29-28 scoring advantage in the second quarter to cut the visitors’ lead to 62-61. The teams stacked runs as Detroit scored seven straight to break a 43-43 tie and Boston immediately knotted the game at 50-50 thanks in part to a Derrick White 3-pointer.

From the 5:12 mark until halftime, neither side led by more than three. It was more of the same to start the second half.

A three-point play by Grant Williams gave Boston an 86-82 lead — its largest of the third quarter — with 2:35 left, but 3-pointers by Saddiq Bey and Cunningham flipped the score back in Detroit’s favor. White’s layup in the final minute reestablished a 92-90 lead for the Celtics heading into the final period.