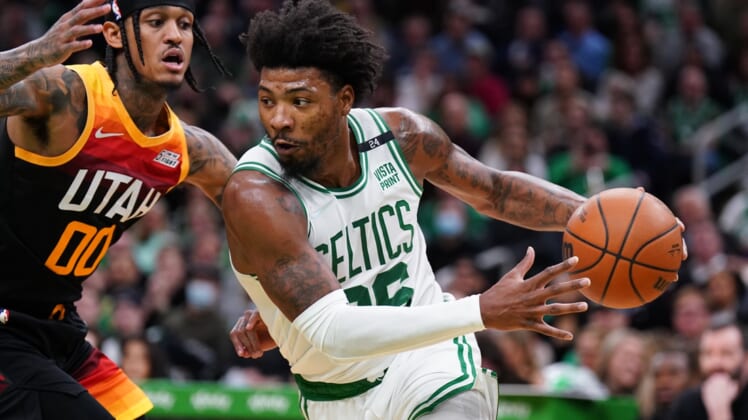 Jayson Tatum and Jaylen Brown each scored 26 points to lead the Boston Celtics to a 125-97 win over the visiting Utah Jazz on Wednesday night.

Robert Williams III added 12 points and 10 rebounds to lead four other Celtics in double figures. Marcus Smart fired off nine of his career-high 13 assists in the first quarter.

Donovan Mitchell had 37 points to lead the Jazz, who have lost back-to-back games after a three-game winning streak.

Boston’s lead was cut to 18 on Mitchell’s three-pointer with 6:41 to go in the third quarter, but 12 of the next 15 points went the hosts’ way and made it a 27-point edge again. Derrick White ended that stretch with a corner three-pointer at the 3:32 mark.

The Celtics hit three of their first four field goals in the fourth quarter, capped by a Payton Pritchard trey with 9:49 left. With the starters out, a Luke Kornet turnaround hook shot with 1:12 left gave Boston its largest lead at 123-91.

The teams put on an offensive clinic in the first half, combining for 26 points over the opening four minutes. But it didn’t take long for the Celtics to start coasting.

Boston jumped out to a six-point lead in that initial span and extended it throughout the first quarter. At the buzzer, it was a 39-24 game and the Celtics had shot 15-for-19 from the field.

The hosts hit 10 straight field goals and six from 3-point range to start before missing their first shot at the 4:05 mark. Tatum canned three of the team’s six first-quarter 3s, while Brown was 5-for-6 inside the arc and hit his only triple for a game-high 13 points.

In the second quarter, Pritchard hit a hook shot with 5:54 to play that gave Boston a 30-point lead with 5:54 left.

Utah ended the opening half with six straight points. Mitchell led the Jazz with 19 in the first half, shooting 7-for-13 from the field.