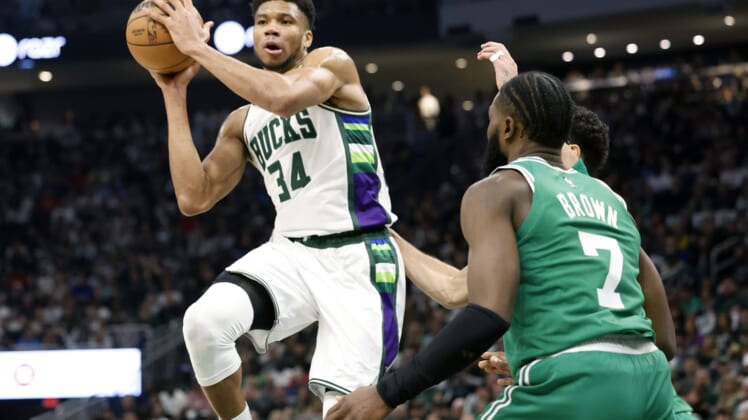 Giannis Antetokounmpo will look to lead Milwaukee to a 3-1 series advantage when the Bucks host the Boston Celtics on Monday night in Game 4 of the Eastern Conference semifinals.

The two-time MVP led Milwaukee to a 103-101 win in Game 3 on Saturday, pouring in 42 points, 12 rebounds and eight assists. It was the sixth time he has scored at least 40 points in a playoff game.

Although Khris Middleton is still out with an MCL sprain, George Hill has returned to the Bucks’ rotation after dealing with an abdomen injury. Hill was quiet in his postseason debut in Game 3, as he was held scoreless in 11 minutes off the bench.

With Hill back in action, Milwaukee is hoping for more production from a bench that has averaged 22.0 points per game in this series.

Monday’s game on the defending NBA champions’ home floor is now essentially a must-win for the Celtics, who will host Game 5 on Wednesday night.

While no loss is easy to swallow, especially in the playoffs, Boston mounted a late-game surge that could give it some momentum heading into Game 4.

After trailing by 13 with 9:48 left to play in the fourth quarter, the Celtics stormed all the way back and eventually went ahead 100-99 after a pair of free throws from Jaylen Brown.

Following buckets from Antetokounmpo and Holiday that put the Bucks up by three, Boston’s Marcus Smart sank the first of two free throws before intentionally missing the second. Robert Williams and Al Horford each missed putback layups.

“Didn’t even have to come down to that last play honestly. We were sloppy in the third and execution-wise at times,” Celtics coach Ime Udoka said. “Battled back well in the fourth, but can play a whole lot better.”

The Celtics were outscored 34-17 in the third quarter.

Brown paced Boston with 27 points and 12 rebounds on 8-of-16 shooting. Al Horford supplied 22 points and 16 rebounds, and Derrick White posted 14 points off the bench.

Jayson Tatum struggled heavily on the afternoon and was held to just 10 points on a lackluster 4-of-19 shooting which included an 0-for-6 effort from 3-point range.

Smart is back with the Celtics after missing Game 2 with a thigh contusion, but Sam Hauser will be out on Monday with a right shoulder issue.

With Saturday’s loss, Boston is still searching for its first win in Milwaukee this season after it dropped both regular-season contests on the Bucks’ home floor.