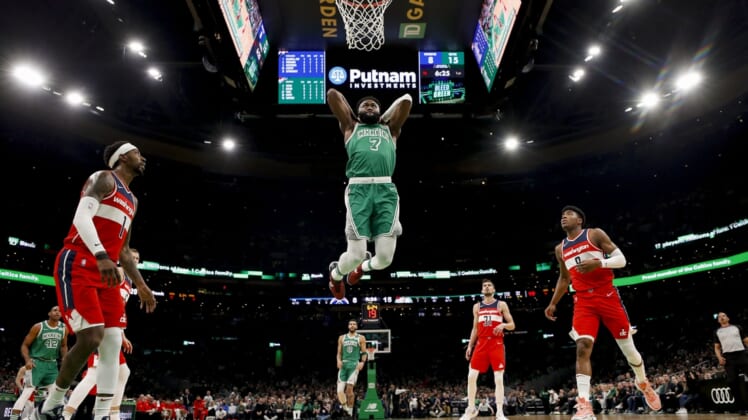 Derrick White had 17 points for Boston, which led by as many as 43 in its regular-season home finale and will finish the regular-season schedule with three road games. Grant Williams scored 16 points, Payton Pritchard added 14 and Aaron Nesmith had 11 for Boston.

The Celtics (49-30) began the day two games behind the top-seeded Miami Heat in the Eastern Conference and a half-game behind the second-place Milwaukee Bucks.

Washington had won four of its previous five games but trailed 35-22 after the first quarter. Brown made three 3-pointers and scored 13 points in the opening period for Boston.

Brown scored 19 points in the first half and the Celtics took a 70-59 advantage into the break. Boston shot 63.6 percent for the half, including 9 of 18 (50 percent) from beyond the arc.

The Celtics rested their starters after taking a 104-79 lead into the fourth quarter. Pritchard’s 3-pointer with 8:03 remaining extended the lead to 124-81.

Al Horford had 10 points, eight rebounds and six assists for Boston, which earned a split of the four-game season series against Washington. The Celtics shot a season-high 61.5 percent from the field, went 23 of 44 (52.3 percent) from 3-point range and also had a season-high 39 assists.

Williams is hoping to return before the second round of the playoffs for Boston, which ends the regular season on the road against the Chicago Bulls, Milwaukee Bucks and Memphis Grizzlies.