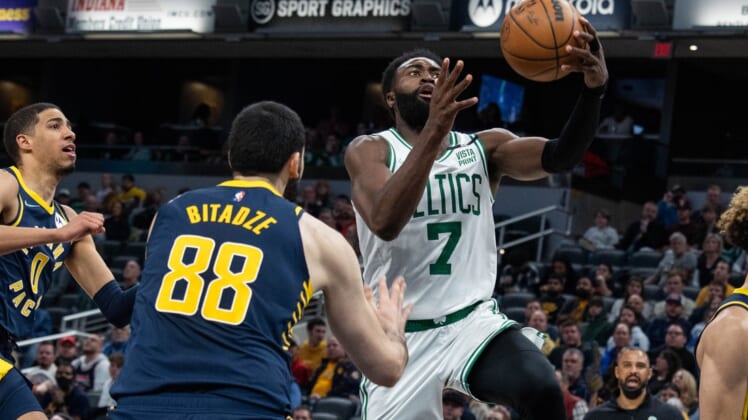 The Boston Celtics play their penultimate home game of the NBA regular season when they host the Indiana Pacers on Friday night.

Boston (47-30) has lost back-to-back games for the first time since January after dropping Wednesday night’s clash of Eastern Conference leaders with Miami, 106-98.

Celtics coach Ime Udoka saw the loss as a good test, especially as it faced a competitive team that defended well. Miami had a 27-15 scoring edge in the fourth quarter and held Boston scoreless for almost four minutes down the stretch.

“Every game is not going to be easy,” Udoka said. “You aren’t going to win every game by 20 points, but keeping your composure when you miss some shots or there are some non-calls, playing through that, this was a good test playoff-wise. This is what it’s going to be like coming up in a few weeks here, so every game is not easy.”

The game featured 16 lead changes and nine ties, but the first-place Heat held on despite Jaylen Brown leading the Celtics with 28 points and 10 rebounds. Jayson Tatum added 23 points and six assists.

“It’s a good thing for us to learn from,” Tatum said. “The season is not decided today. We’ve still got games to play, so we’ll be good.”

With big man Robert Williams out (left knee meniscus tear) for a projected four to six weeks, Daniel Theis totaled 15 points on 6-of-6 shooting off the bench and Al Horford grabbed a game-high 15 rebounds.

“We missed some opportunities, had some turnovers trying to force some passes tonight, but Daniel had a great game overall,” Udoka said. “You can see his growth (in) what he’s doing the past few games. It’s going to be important going forward.”

The Celtics will be looking to avoid their first three-game skid since Dec. 25-29, 2021. Monday’s 115-112 overtime loss at Toronto snapped a six-game win streak.

The Pacers (25-52) are in the midst of a five-game losing streak that continued with Wednesday’s 125-118 loss to Denver. Indiana scored 38 points in both the second and third quarters, climbing out of what was once a 31-point deficit before falling short.

Just nine players were part of the Pacers’ rotation as Oshae Brissett was held out due to a sore lower back.

“We’re in a tough spot with personnel,” head coach Rick Carlisle said. “But we have to do our best. And we didn’t do our best tonight.”

“I’m just collecting and being more calm with myself,” said Hield, who was acquired from Sacramento in a February trade. “(I’m) trusting my work and trusting what got me here. I just work with the coaching staff every day and watch film to see how I can be effective. I’m taking good shots now.”

Goga Bitadze had 17 points and 10 rebounds, and Tyrese Haliburton scored 15 to go along with 12 assists.

Boston and Indiana will be meeting for the fourth time this season. The Pacers canned 17 3-pointers on their way to a 128-107 home win when the teams last played Feb. 27 in Indianapolis.

Brissett scored a game-high 27 for Indiana. Tatum led the Celtics with 24.