Celtics favored but public backing Nets ahead of Game 2 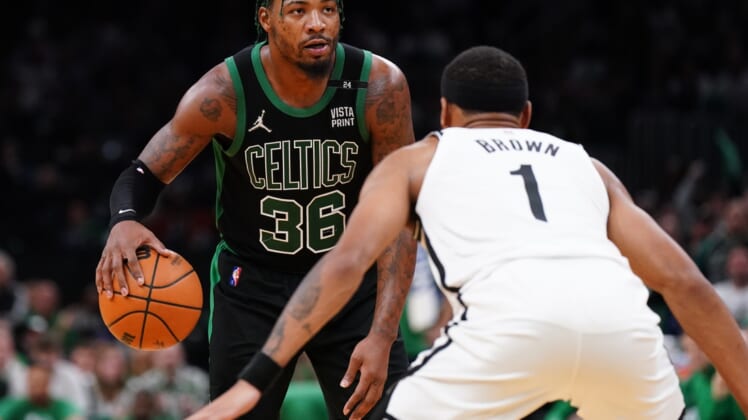 On the final key sequence of Game 1 in their first-round playoff series, all five Boston Celtics on the court touched the ball following a defensive stop that led to Jayson Tatum’s game-winning layup as the buzzer sounded.

Coming off a dramatic series opener, the Celtics will use their solidarity-driven momentum to seek a 2-0 lead in their Eastern Conference first-round series Wednesday night when they play host to the Brooklyn Nets.

The Celtics were 3.5-point favorites at most sportsbooks on Wednesday. However, the Nets were being backed by 64 percent of the spread bets and 68 percent of the handle at BetMGM and 78 and 75 percent, respectively, at DraftKings.

The Celtics aim to win the first two games of a first-round playoff series for the fourth time in five seasons. Last year, they were overmatched against Brooklyn’s star trio of Kevin Durant, James Harden and Kyrie Irving and lost the first-round series in five games.

This time, the Celtics own better cohesion, especially in the past two-plus months.

The togetherness emerged in a frenetic final few possessions of Sunday’s dramatic 115-114 win.

The Celtics were a connected unit on the defensive end immediately before Tatum’s shot. They played a rotating double team on Irving deep in the post and then Tatum bottled up Durant to force a missed 3-pointer.

Al Horford grabbed the rebound and passed to Derrick White, who hit Jaylen Brown on an outlet pass. Brown kicked the ball to Marcus Smart for a possible 3-pointer. Instead of shooting, Smart waited for Brooklyn’s Bruce Brown to leave his feet and spotted a cutting Tatum going by Irving for the game-winner at the horn.

“It feels good. Especially in the first game of a series,” Tatum said. “It doesn’t get any better than that. A buzzer-beater in a playoff game at home.”

“It was fulfilling for us, especially because of the way we started this year off, those types of games we lost,” Smart said. “We were probably crumbling. … But the resilience that we have, the approach we have, and the work we put in to make sure that doesn’t happen. And you just learn.”

Tatum’s dramatic moment capped a 31-point performance and ensured the Celtics survived 39 points from Irving. Tatum was also part of a defensive effort that held Durant to 23 points on 9-of-24 shooting from the field and forced the superstar into six turnovers as Horford and Grant Williams also defended Durant at times.

The Nets did enough right offensively by shooting 53.8 percent as a team but hope they can correct their various mistakes and avoid falling into a 2-0 hole heading back for Brooklyn for Game 3 on Saturday night when Ben Simmons might make his debut for the team.

“We’ll definitely clean up on things we can control like their offensive rebounding, limiting them to one shot, one possession,” Irving said. “I feel like that’s what gave them life at the end of the game, getting those offensive rebounds and making some big plays.”

While the Nets performed well enough offensively at times after shooting 42.5 percent in the regular-season against Boston, they allowed 14 offensive rebounds and 18 second-chance points.

Brooklyn also was outscored 56-32 in the paint and outscored 35-24 in the third quarter, forcing them into a big comeback from a 15-point deficit that fell short when Tatum slipped by Irving, who scored 18 points in the fourth.

“We have to look at ourselves in the mirror as a team and just see where we can control the little things, the little details to be able to close out the game,” Irving said. “We had the game in control then a last-second shot beats us.”