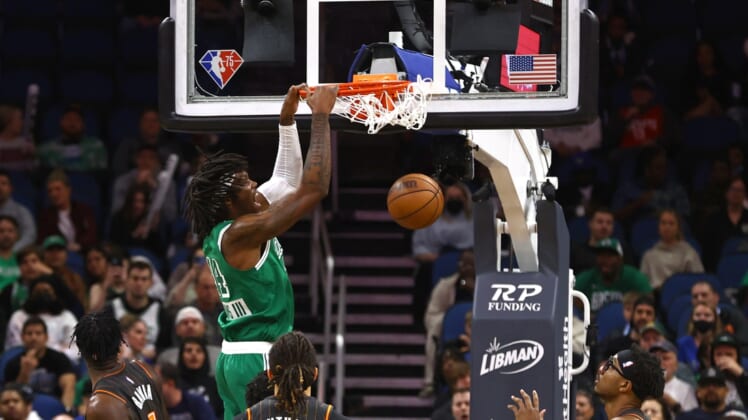 Jaylen Brown scored 26 points, Dennis Schroder contributed 22 points off the bench and the Boston Celtics extended their season-best win streak to five games with a 116-83 victory over the host Orlando Magic on Sunday night.

Boston easily overcame an uneven shooting performance by All-Star Jayson Tatum, who had 15 points on 6-for-18 shooting from the floor 2-for-8 from 3-point range, to defeat Orlando for the ninth straight time dating back to January 2020. Tatum also collected nine rebounds and seven assists.

Jalen Suggs paced Orlando with 17 points, but the Magic shot 35.8 percent (29-for-81) from the floor and made only five triples (5-for-26) against one of the league’s top defensive clubs.

Wendell Carter Jr. was the only other Magic player in double figures, scoring 14 points to go along with eight rebounds. Cole Anthony had nine points on 3-for-10 shooting and Mo Bamba (10 rebounds), Franz Wagner (seven rebounds) and Chuma Okeke scored eight points apiece.

The Celtics held a 29-22 scoring edge in the third quarter for a 78-61 lead, then outscored Orlando 38-22 during the fourth to sweep the three-game season series. Boston once again stifled the Magic offensively after holding them to a season-low 79 points on Nov. 3.

The Magic converted 20 of 21 free throws during their 20th home loss of the season.

Boston missed 12 3-pointers in the first quarter, but the Celtics managed to make five triples in the next period en route to a 49-39 halftime lead. The Celtics ended the first half on a 12-5 run, while Orlando shot 32 percent during the opening 24 minutes with a 1-for-12 mark from beyond the arc.