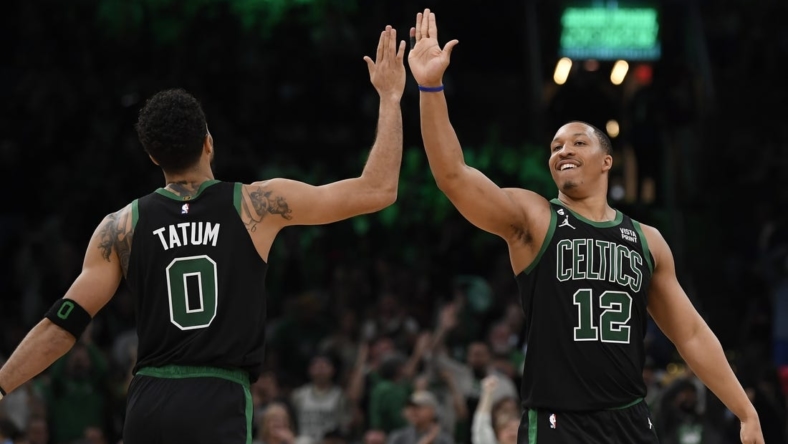 The Boston Celtics are hot, and they will get a chance to keep their winning streak going against a team they defeated just three nights ago.

Boston collected its fifth straight victory on Friday, defeating the visiting Denver Nuggets 131-112. The Celtics now head to Detroit to face the Pistons on Saturday night.

Jayson Tatum continued to lead Boston, scoring 34 points against Denver. Tatum has reached the 30-point mark in four of the past five games and in seven of the Celtics’ 12 games this season.

“JT takes on new challenges and just continues to get better, continues to feel the game out,” teammate Al Horford said in a postgame TV interview. “He’s playing at a really high level right now, as good as anyone in the league.”

Payton Pritchard led the Celtics’ reserves with 11 points in 16 minutes. Pritchard, a rotation regular the past two seasons, had played in only four games before Friday and hadn’t scored more than four points in any game.

“I just love the energy that we’re playing with,” Horford said. “Our guys off the bench are coming out ready to go, trying to send a message, set the tone and playing with a whole lot of pace. We have a lot of depth, so that’s a big part of our team.”

The Pistons, with leading scorer Cade Cunningham in street clothes, lost to the host New York Knicks 121-112 on Friday. Cunningham sat out due to left-shin soreness, and it’s questionable whether he will play against the Celtics.

Cunningham, the No. 1 overall pick in the 2021 draft, had arguably the worst game of his career on Wednesday. He shot 1-for-11 from the field while contributing just four points, three rebounds and two assists in 24 minutes.

Bojan Bogdanovic led eight Pistons in double figures on Friday with 25 points. Alec Burks, making his season and Detroit debut, added 17 points off the bench. Burks, who recovered from a foot injury, was acquired from the Knicks in an offseason deal.

Detroit trailed New York by 16 in the second quarter and by 10 at halftime but cut the deficit to four points in the final two minutes.

“Our defense in the second half is the way we have to play,” said Pistons coach Dwane Casey, whose team lost for the fifth time in six games. “We can’t wait until we get punched in the mouth to do it. It was like night and day in the second half.”

Backup point guard Killian Hayes has delivered encouraging performances in back-to-back games after being a non-factor in his first 11 outings this season.

Hayes had 16 points on Wednesday and followed that with an 11-point, seven-assist, six-rebound and three-steal performance on Friday while playing a season-high 34 minutes.

“The key is he played starter’s minutes,” Casey said. “People look at who’s name is called out when the game starts. What’s important is who finishes. Tonight, Killian finished.”