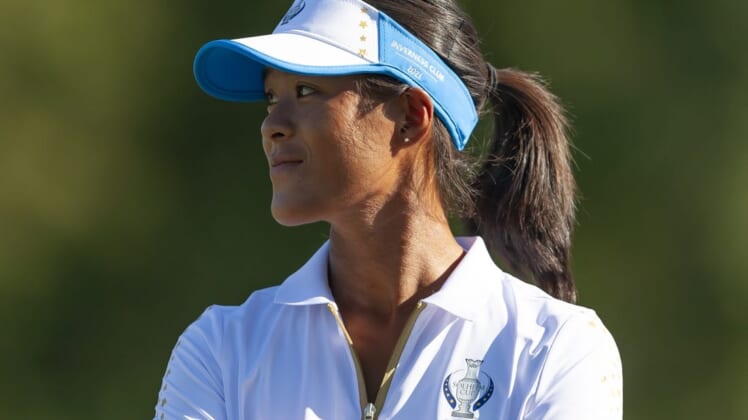 France’s Celine Boutier carded five birdies on the front nine Saturday while moving into a first-place tie with Lydia Ko of New Zealand after three rounds of the Women’s Scottish Open on Saturday at Ayrshire, Scotland.

Boutier, who shot a 5-under-par 67, finished with six birdies against one bogey to reside at 15-under for the tournament at Dundonald Links.

The 28-year-old Boutier is bidding for her third LPGA victory and first since winning last year’s ShopRite LPGA Classic.

“I think what I’ve learned of being in this position in the past is that really anything can happen, whether you have the lead or not,” Boutier said. “Try to not get too far ahead of yourself and focus on what you can control which is really each shot at a time.”

Ko, the world’s No. 4-ranked golfer, followed up consecutive 65s to begin the tournament with a 1-under 71 on Saturday. The 25-year-old birdied the last hole to help offset three bogeys during her round.

“You don’t want to be making careless mistakes and I feel like I made a couple out there,” Ko said. “I guess when you look back on any day, you feel like, oh, I could have, I should have. You could just keep going (like that), digging yourself down a hole and never be able to get out of it.”

Ko is bidding for her 18th career win on the LPGA Tour and second of 2022. She tied for second place at the Women’s Scottish Open last year.

Ko also is preparing for next week’s Women’s British Open, the fifth and final major of the women’s golf season. Though a two-time major champion, Ko hasn’t won a major title since 2016.

Canadian Maude-Aimee Leblanc tied for low-round of the day with a 6-under 66. She joined Germany’s Leonie Harm (67) in a tie for third place, trailing the co-leaders by one stroke.

South Korea’s Eun-Hee Ji (70) and Lilia Vu (71) are two shots in back of Boutier and Ko in a tie for fifth place, while Cheyenne Knight (67) and Thailand’s Wichanee Meechai (70) are at 12 under and tied for seventh.

Defending champion Ryann O’Toole shot a 73 and is in a seven-way tie at 4 under, while World No. 1 Jin Young Ko (74) of South Korea sits at 1 under.