Celebrating a Cubs World Series with this Giants fan

It’s a sentence many people never thought they’d live to see. It’s not a typo, misprint, or dream.

Cubs fans or not, we all lived to see it. Babies born between now and next fall will be born into a world where this team is the reigning World Series champion.

Where do the thoughts go at a time like this?

I’ll only speak for one person. But I can’t help but wonder how many similar thoughts are going around as the 2016 World Series has come to an end.

I’m not a Cubs fan. I was born in San Francisco and raised in the Bay Area as fan of the first team vanquished on Chicago’s magical postseason run — the San Francisco Giants. But despite a frustrating NLDS loss, it was easy to cheer for the Cubs. Obviously, Giants fans quickly got over any anger with Chicago when the Cubs played the Los Angeles Dodgers in the NLCS.

But for me, this was a little more personal.

When Kris Bryant threw to Anthony Rizzo to retire Michael Martinez, the first person I thought of was my mother — one of the two people most responsible for my love of baseball.

When the Giants won the World Series in 2010, I was lucky enough to watch with my parents. Any potential clincher without them in the same room wouldn’t have felt quite as sweet.

My mom couldn’t watch Chicago’s win with her parents. Her mother died in 1978, seven years before her first grandchild was born. Her father died in 2014.

Unlike me, my mother grew up a Cubs’ fan. She was born Illinois, grew up in Indiana, and Don Kessinger was her favorite player of all-time. Quite frankly, at 60-years-old, it was certainly fair for her to wonder if she’d ever see this day.

I thought of my dad. He did not grow up in the Chicagoland area. In fact, my dad didn’t become a big fan of baseball until I was born in 1985. But my dad loves the music of Steve Goodman, the man who penned the song now tattooed in the minds of so many, Go Cubs Go. Goodman wrote and sang a few songs about the Cubs. One of them, which came towards the end of his life, was the sad but humorous, A Dying Cub Fan’s Last Request.

For the first 10 years of my life, it felt like 90 percent of car rides with my dad included that song. I had that song memorized before I knew how to ride a bike. While that song will always have a place in my heart, it’s now irrelevant. They no longer “Play the blues in Chicago, when baseball season rolls around.” Wrigley Field is certainly not an “Ivy covered burial ground” anymore.

Certainly, some empathy goes out to fans of the Cleveland Indians.

The Golden State Warriors fan in me does think it’s hilarious that all of the memes from fans of the Cleveland Cavaliers mocking the Warriors for blowing a 3-1 lead in the World Series will now come back to bite hard.

But those memes shouldn’t represent the majority of Cleveland fans. Heck, many of those probably came from “fans” who mocked LeBron James and the Cavs in 2015 when the Warriors won. Bandwagon jumpers are a real thing, folks. If you have a winning team, they’re in your fan base, like it or not.

For the non bandwagon jumpers, think about this.

Since 1964, Chicago has seen six championships from the Bulls, three from the Blackhawks, and one each from the White Sox, Bears, and now Cubs. In that same span, Cleveland has seen only one championship.

Outside of that, fans in Northeast Ohio have seen ample heartbreak in near misses. They’ve also seen the Cleveland Browns become the Baltimore Ravens and win two Super Bowls. They’ve seen LeBron burn them on national television and win two NBA Championships in Miami.

While it hasn’t been 108 years, Indians’ fans have waited a while, too. Plenty of fans have come and gone from this earth without ever seeing this team win a World Series. Others are certainly wondering if they ever will. 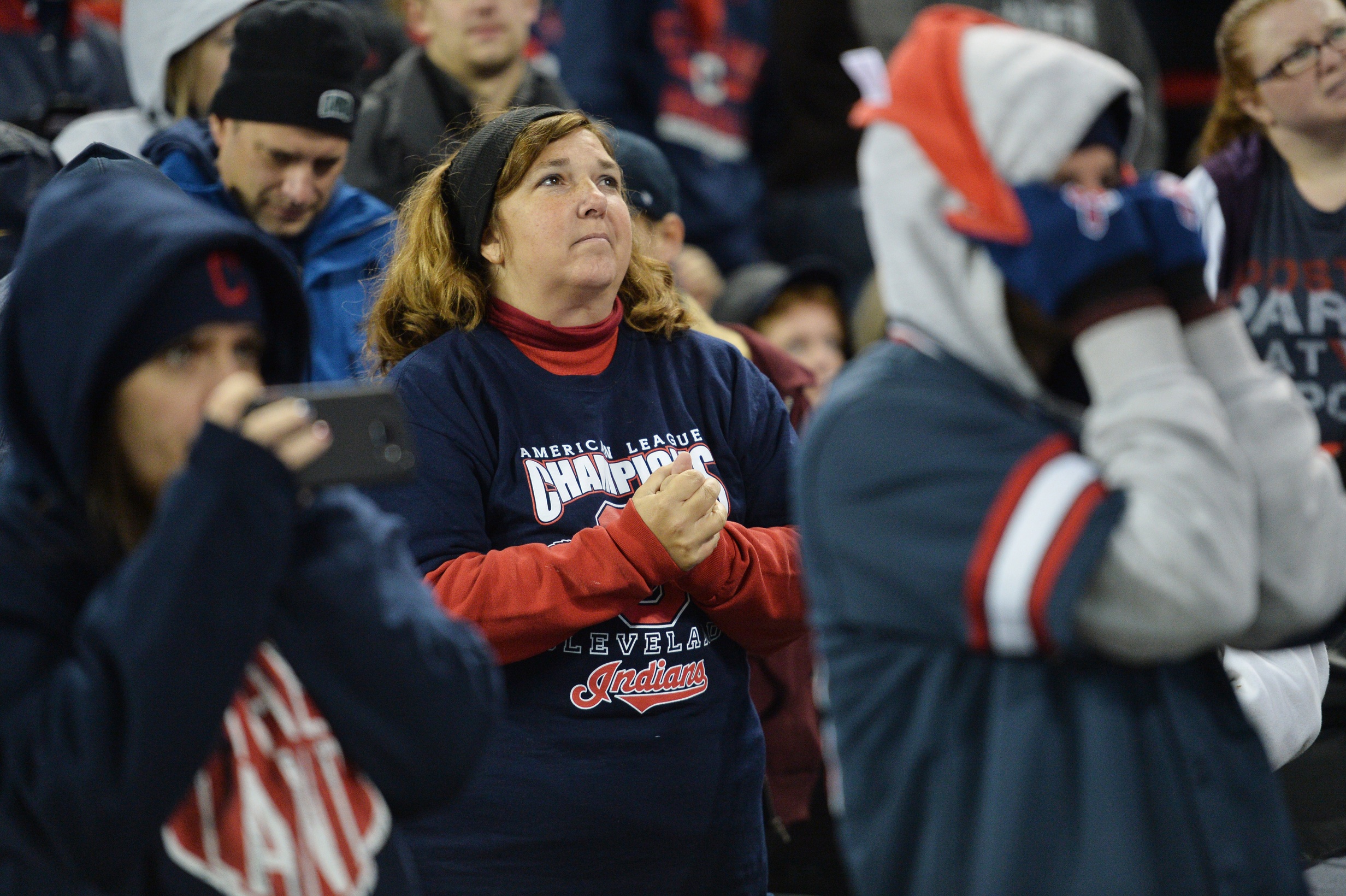 Blowing this 3-1 lead might have been appropriate karma for some Cleveland fans. But for others — the majority of them — it just hurts.

My mind also went to cemeteries in and around Chicago. How many will be filled with Cubs shirts, hats, and white flags with a big blue “W” on them? More than a few tears will be shed in those moments.

On that note, it was hard to not think about people like Jack Brickhouse, Harry Caray, Ernie Banks, or Ron Santo. While they are still with us, it’s hard not to smile for the likes of Kessinger, Billy Williams, Fergie Jenkins, Mark Grace, Kerry Wood, and so many other Chicago greats.

One of those greats was Ryne Sandberg. In 1991, at six-years-old, I walked around the field before a game at Candlestick Park between the Cubs and Giants. I got my picture taken with San Francisco manager Roger Craig in the Giants’ dugout and catcher Terry Kennedy on the field.

As we walked by the visiting dugout on the way off of the field, my dad noticed Sandberg. When my dad asked Ryno if he’d take a picture with me, the future Hall of Fame second baseman graciously agreed, invited me into the dugout, put his arm around me, and posed while my dad snapped the photo.

A 6-year-old me and Ryne Sandberg. Definitely thought of this moment as the Cubs won it all. pic.twitter.com/vbd8LCUTH5

I’ll never know if Sandberg wanted to take that picture with me. But if he didn’t, he certainly didn’t let it show. Sandberg did a lot of great things as a player, but never won a World Series. I sure hope he was happy after this one.

Bartman never deserved the blame he got for what happened in 2003. He was one of many fans putting his hands up. Even without all of those hands, an above-average play would have been required from a below-average outfielder in Moises Alou.

But fair or not, his moment always loomed large. It was made for the highlight reels, spotlighting all of Chicago’s near misses. Bartman obviously never tried to cash in on any of it. The man has actively tried to avoid spotlight for 13 years. Apparently, he even showed no interest in returning to Wrigley in any ceremonial role during the World Series.

It would not be out of place for the Cubs to offer him a special place in the World Series parade, or first pitch/Take Me Out to the Ballgame honors at Wrigley Field’s 2017 opener. But whether he accepts or declines, Bartman deserves to live in peace. He deserves to not have his name mentioned on television, or written anywhere.

Frankly, the highlight of that infamous foul ball doesn’t matter, anymore. The same goes for the billy goat, black cat, or anything else associated with the last 108 years.

The Cubs are World Series champions.