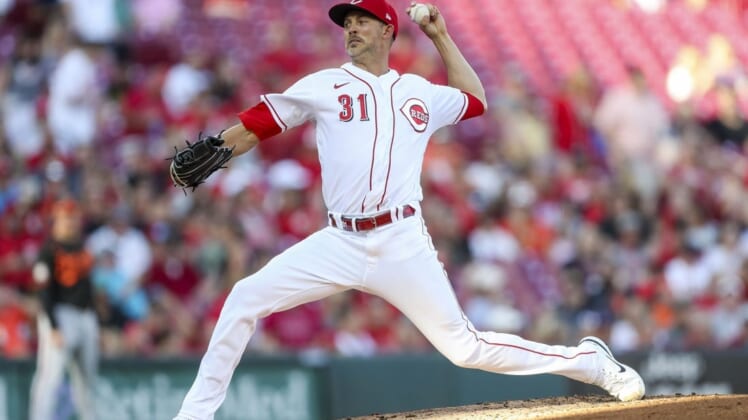 Cedric Mullins’ two-run single with one out in the top of the ninth began a four-run rally as the Baltimore Orioles defeated the host Cincinnati Reds 6-2 on Friday night.

The Orioles’ fourth pitcher, Dillon Tate (2-3), worked out of a seventh-inning jam and pitched a scoreless eighth to earn the win.

Benches briefly cleared in the ninth when Cincinnati reliever Dauri Moreta hit Anthony Santander with a pitch after the Orioles had taken the lead. Santander’s two-run homer in the sixth tied the game 2-2.

The Reds took the lead in the first inning, with leadoff batter Jonathan India hitting a double on a fly ball that left fielder Austin Hays appeared to lose in the sun. With two outs, Joey Votto lofted the first pitch he saw from Orioles starter Kyle Bradish to the first row of seats in right field for his ninth homer of the year.

In his first start since June 18 due to right shoulder inflammation, Bradish allowed only the two runs and five hits over five innings and 81 pitches. The right-hander struck out seven and walked none.

The Orioles struggled for the first five innings against Cincinnati left-hander Mike Minor before breaking through in the sixth.

Trey Mancini, who hit a game-winning inside-the-park homer on Thursday, drew a one-out walk. Anthony Santander then drilled the seventh pitch of his plate appearance into the seats in left for his 18th homer.

Minor was pulled after the home run, allowing the two runs on four hits over 5 1/3 innings, striking out four and walking three.

The Orioles threatened in the seventh and eighth but couldn’t break the tie. In the seventh, Jorge Mateo tripled over the head of Nick Senzel in center with two outs but was stranded when Mullins flew out to left.

One inning later, facing reliever Ian Gibaut, Adley Rutschman opened with a single and Mancini walked on four pitches. But Gibaut retired the next three batters to keep the game tied.

The Orioles finally broke through in the ninth against right-hander Buck Farmer (0-1), the fourth Cincinnati reliever. Ramon Urias walked, and Ryan McKenna entered to pinch run. McKenna advanced to third on a double down the right field line by Rougned Odor.

After a pop out to center by Mateo, Mullins singled to center past a drawn-in infield to snap the tie.