Cedric Mullins looks to lead Orioles in finale vs. Angels 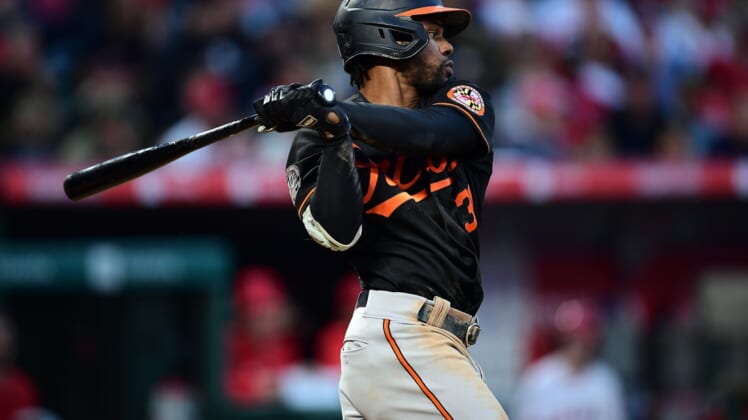 The Los Angeles Angels and Baltimore Orioles will rely on their center fielders in Sunday’s finale of their three-game series in Anaheim, Calif.

The Angels’ Mike Trout, who homered twice in Saturday’s 5-4 loss to the Orioles, is a three-time MVP and nine-time All-Star, but the Orioles have an emerging star in Cedric Mullins.

Mullins had a breakthrough season in 2021, joining the 30-homer, 30-stolen-base club while racking up 37 doubles, five triples and an .878 OPS. He was an All-Star and won a Silver Slugger award.

Mullins, however, is off to a slow start in 2022 but showed flashes Saturday of what he can bring to the Orioles. He led off the game with a walk, stole second and third base and then scored on a single. In all, he went 1-for-3 with a walk, two runs scored and two stolen bases. But his season numbers still are a work in progress.

He’s hitting .190 with 639 OPS. Orioles manager Brandon Hyde said the league has made adjustments to Mullins, and now is the time for his 27-year-old center fielder to make adjustments of his own.

“Teams have a long time to game plan for good players,” Hyde said. “Teams now have departments of people to dissect how to get hitters out. They’re going to expose your weaknesses, and that’s what good hitters do in this league, is constantly making adjustments. Ced’s in that category right now where there’s going to be adjustments he’s got to make back to the league.”

Mullins is used to making adjustments. Before the 2021 season, he was a switch hitter. But he became a left-handed hitter only last year, and it paid off.

Right-hander Chris Ellis (0-0, 0.00 ERA) will make his second start of the season for Baltimore. He scattered four hits over 4 1/3 scoreless innings Tuesday against the Oakland A’s.

Ellis has faced the Angels once in his career, receiving a no-decision after giving up three runs and five hits in three innings.

Angels first baseman Jared Walsh is expected in the lineup with the Orioles throwing a right-hander. Against left-handers, the left-handed-hitting Walsh has been on the bench this season despite an All-Star season last year in which he hit .277 with 29 homers, 98 RBIs and an .850 OPS.

“No, no, no, I’m trying to stay out of trouble,” Walsh said. “If I make it an issue, it’s an issue, so it falls on me. I have the right attitude, and I’m a firm believer in that it’s all gonna work out in the end. I can’t control it. I don’t write the lineup. I respect management’s decision. I come in and bust my butt.”

Left-hander Jose Suarez (0-1, 5.19) will make his third start of the season for Los Angeles. He hasn’t gotten through five innings in either of the first two starts.

Suarez has made one career start vs. Baltimore, receiving a no-decision after giving up two runs and four hits in 4 1/3 innings in July 2019.