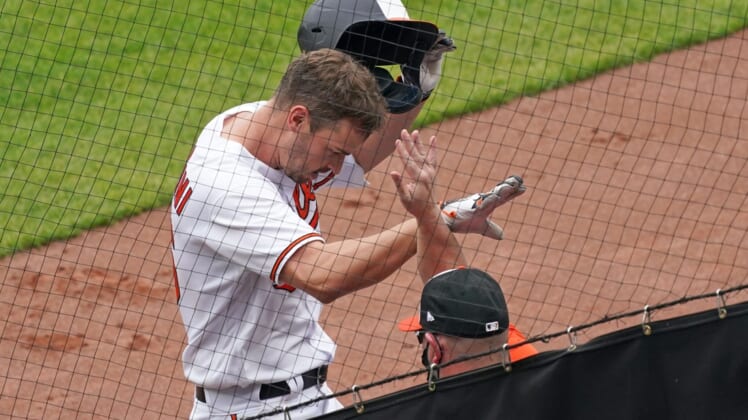 Cedric Mullins hit a game-winning sacrifice fly that was upheld via replay in the 10th inning and the Baltimore Orioles edged the visiting New York Yankees 4-3 on Thursday afternoon at Camden Yards.

Baltimore won its second extra-innings game over the Yankees this season when free runner Ramon Urias was sacrificed to third by Pat Valaika. Two pitches later, the Orioles won it when Mullins lifted an 0-1 changeup from Jonathan Loaisiga (2-1) that center fielder Aaron Hicks caught.

Urias easily scored standing up and the Yankees challenged to see if he tagged up from third base too early. Following a review, the original call was upheld, and New York manager Aaron Boone briefly discussed it with crew chief Greg Gibson before exiting the field.

The Orioles salvaged a split of the four-game series after Cesar Valdez blew his second save by issuing two walks and allowing a tiebreaking ground-rule double to Gleyber Torres in the top half of the ninth when the Yankees were down to their last strike.

Torres’ tying hit occurred after the Orioles grabbed a 3-2 lead in the eighth when Mullins easily scored from first on a double by Austin Hays off Darren O’Day.

The Orioles also salvaged the split of the four-game series after being outscored 12-1 in the previous two games and also beat the Yankees for the fifth time in the past seven meetings in Baltimore.

Trey Mancini had three hits and accounted for Baltimore’s first two runs with an RBI single in the first and a homer in the sixth off left-hander Jordan Montgomery.

The Yankees capped a respectable 5-3 road trip on a disappointing note by going 3-for-14 with runners in scoring position and stranding 12.

Rougned Odor hit a two-run bases-loaded single in the fifth off Adam Plutko, but the Yankees failed to add on until Torres prolonged the game.

Baltimore’s Jorge Lopez allowed two runs on four hits in four-plus innings. He struck out three, walked two and was lifted after allowing the first two hitters to reach in the fifth.

Montgomery allowed two runs on six hits in five-plus innings. He struck out one, walked one and was lifted after Mancini homered.