Cavs, Nets meet with seventh place up for grabs in East 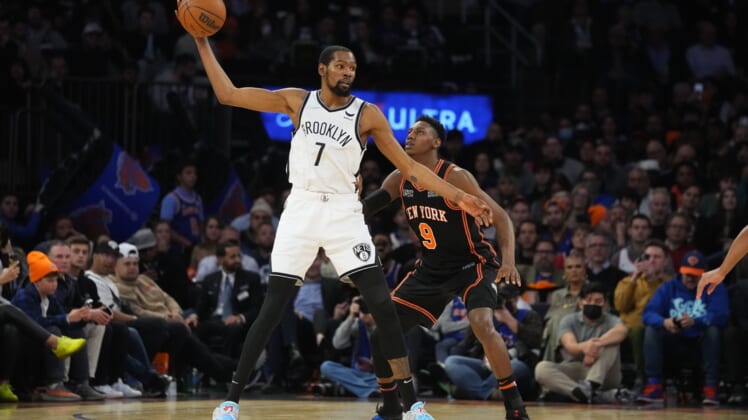 For differing reasons, the Brooklyn Nets and Cleveland Cavaliers weren’t projected to compete for a play-in berth when the season began.

On Friday night, seventh place will be on the line in the Eastern Conference when the Cavaliers visit the Nets.

Brooklyn owns the tiebreaker entering Friday due to its 2-1 record against Cleveland this season, but the Cavaliers can even the season series as they head into the playoffs for the first time since LeBron James departed for the Los Angeles Lakers in 2018.

Whoever finishes seventh will get the home game against the eighth seed, with the winner advancing to the first round. The loser will face the winner of the game between the ninth and 10th seed, and the winner of that game will earn the No. 8 seed.

Brooklyn’s situation has improved from last week, when it suffered a one-point overtime defeat to the Milwaukee Bucks and a seven-point road loss to the Hawks despite Kevin Durant scoring a career-high 55 points.

The Nets then swept a back-to-back set against the Houston Rockets and New York Knicks. They followed a 13-point win Tuesday against the Rockets with an impressive defensive showing in the second half of a 12-point victory over the Knicks.

Brooklyn stormed back from a 21-point deficit when it outscored New York 60-31 in the second half, when Durant scored 23 of his 32 points. The Nets held the Knicks to 38.6 percent from the field and did not allow a field goal for the final 7:10.

Besides getting a chance to tie the Cavaliers, Brooklyn is attempting to gain more separation from ninth-place Atlanta and the 10th-place Charlotte Hornets in the East.

The Nets have the same record as the Hawks but own the head-to-head tiebreaker. The Nets entered Thursday with a 1 1/2-game lead over the Hornets, who hosted the Orlando Magic – the same team that beat the Cavaliers on Tuesday as Cleveland continued to falter without Jarrett Allen and rookie Evan Mobley.

The Cavaliers are 6-10 since Allen fractured his finger in a 104-96 win over the Toronto Raptors on March 6. Mobley has missed the past five games with an ankle injury, and Cleveland’s only win during that stretch was Saturday’s 119-101 victory at New York.

The Cavs lost 120-115 in Orlando on Tuesday when they allowed 16 3-pointers and the Magic to shoot 50.5 percent from the field.

“They can anchor the defense,” Cleveland’s Lauri Markkanen said of Allen and Mobley. “They’ve been doing a great job of communicating, and we obviously miss them. But we don’t know when they’re going to come back, and we’ve got to figure it out.”