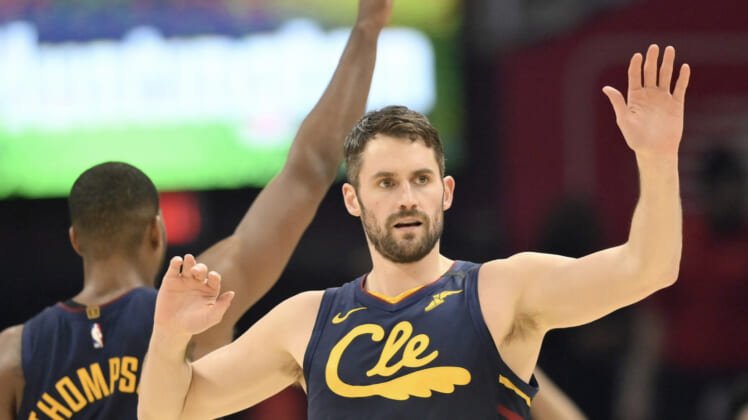 The NBA took the unprecedented step on Wednesday evening of shutting down the season due to the coronavirus pandemic impacting the world.

It’s in this that Cleveland Cavaliers star Kevin Love has announced a $100,000 donation via a passionate Instagram post on Thursday.

“Everyone reacts differently to stressful situations. And the fear and anxiety resulting from the recent outbreak of COVID-19 can be extremely overwhelming. Through the game of basketball, we’ve been able to address major issues and stand together as a progressive league that cares about the players, the fans, and the communities where we work,” Love said in his post. I’m concerned about the level of anxiety that everyone is feeling and that is why I’m committing $100,000 through the @KevinLoveFund in support of the @Cavs arena and support staff that had a sudden life shift due to the cancellation of the NBA season. I hope that during this time of crisis, others will join me in supporting our communities.”

It’s something that has not been talked about too often since news of the NBA suspending its season broke about 24 hours ago. Those who rely on games for a living are going to be among those most impacted.

Love also touched on the broader topic of the pandemic himself, asking people to be kind and understanding to one another.

“Pandemics are not just a medical phenomenon. They affect individuals and society on so many levels, with stigma and xenophobia being just two aspects of the impact of a pandemic outbreak. It’s important to know that those with a mental illness may be vulnerable to the effects of widespread panic and threat. Be kind to one another,” the All-Star continued. “Be understanding of their fears, regardless if you don’t feel the same. Be safe and make informed decisions during this time. And I encourage everyone to take care of themselves and to reach out to others in need — whether that means supporting your local charities that are canceling events, or checking in on your colleagues and family.”

That’s advice pretty much everyone should take to heart during these most difficult times around the United States and the broader world.

As it relates to the NBA, we have no idea when a return to the season will take place. It’s likely going to be a long-term hiatus. At the very least, some players are taking it upon themselves to help their local communities.