Cavaliers replace ‘all in’ slogan with odd quote

The Cleveland Cavaliers are two losses from falling in the NBA Finals to the Golden State Warriors for a second consecutive season.

In this, the team has moved on from the slogan that has defined its run to the championship round.

A banner outside of Cleveland’s Quicken Loans Arena was changed from the “all in” saying to a quote from Frenchman Jean-Paul Sartre.

The new banner reads, “all human activities are doomed to failure.” 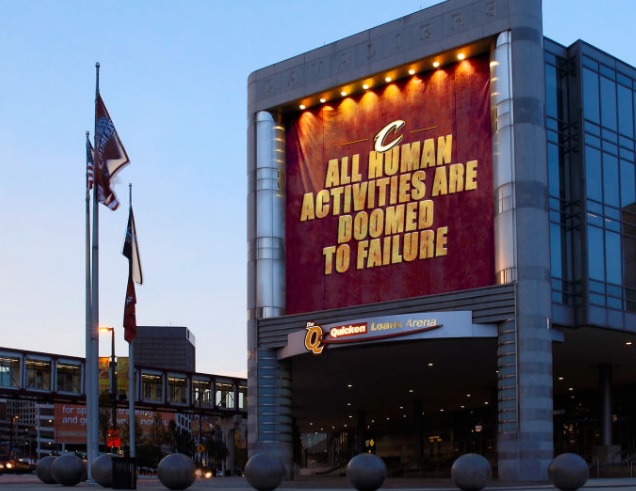 It’s an abridged quote from the philosopher that originates from Sartre’s 1943 essay “Being and Nothingness.”

The idea behind this is that when attempting to accomplish great things, failure becomes an obstacle one must overcome. For Sartre it’s part of the human element.

The change in slogan was done at the behest of Cavaliers star LeBron James, who also helped form the “all in” saying that defined the team’s success this season.

Though, those who don’t look into the meaning of the actual quote will find some fault in Cleveland’s new slogan. And for good reason, it specifically focuses on failure — something that Cavaliers have seen a lot of thus far in the Finals.

Through two games, Cleveland has been outscored by a grand total of 48 points — a record for the first two games in Finals history. It has also lost seven consecutive games against the defending champion Warriors by a combined 130 points.