Cavaliers rally to knock off Nuggets in OT 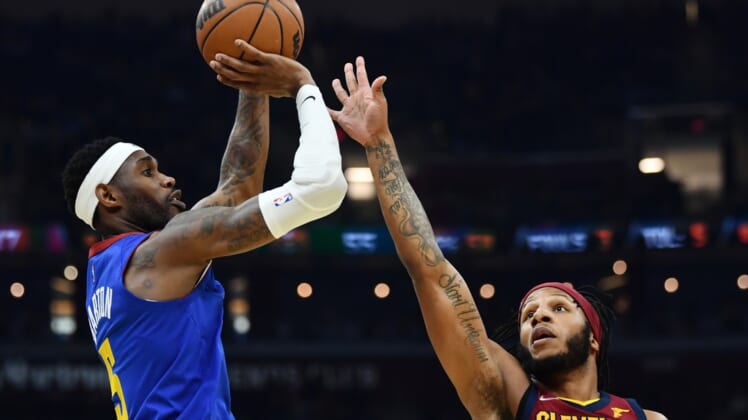 Lauri Markkanen’s 3-pointer with 28 seconds left in overtime was the decisive basket in the Cleveland Cavaliers’ 119-116 come-from-behind victory over the Denver Nuggets on Friday.

Markkanen had a season-high 31 points and grabbed 10 rebounds, while Evan Mobley tallied 27 points and 11 rebounds and Darius Garland put up 25 points and 14 assists.

The Cavs closed the overtime period on a 10-2 run, capped by Mobley’s highly contested layup with 11.2 seconds remaining.

MVP candidate Nikola Jokic had a game-high 32 points, plus 10 rebounds and eight assists for the Nuggets, who had their franchise-record seven-game road winning streak snapped.

The Cavs, 2-1 on this critical five-game homestand, will host Detroit on Saturday.

The Cavs took an early 16-8 lead, capped by Markkanen’s 3-pointer. Markkanen had 10 points and five rebounds to help the Cavs to a 31-29 lead after one quarter. The extremely active Gordon scored 10 points for the Nuggets.

The Nuggets fashioned a 13-0 run to move out to a 39-31 advantage in the second quarter. Hyland scored 13 points as Denver opened a 63-52 bulge at halftime.

The Nuggets shot 56 percent in the half and did pretty much whatever they wanted. Denver’s bench outscored Cleveland’s 29-8.

Markkenan had 18 points and eight rebounds in the half for the Cavs.

The Nuggets withstood a rally by Cleveland and held on for an 87-78 lead entering the final quarter.

Garland’s layup handed the Cavs a brief 102-100 lead with 4:21 left. Nokic followed with a layup to knot the score.

Nokic’s layup with 43 seconds left in the fourth period sent the game into overtime tied at 107.