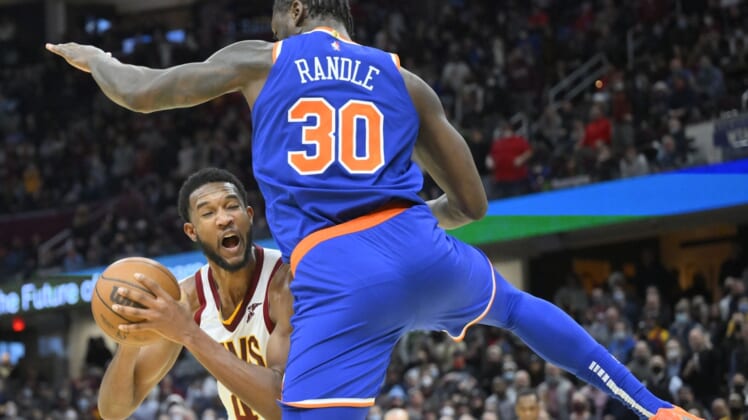 The Cleveland Cavaliers once were in a fairly comfortable position for home-court advantage in the first round and now they are hoping to attain a home-court edge for a play-in game.

These days, the Cavaliers are missing two of their top interior presences and hope to provide better defense Saturday afternoon when they visit the New York Knicks.

Cleveland (42-35) is 7-14 over its past 21 games since its 120-113 win over the Indiana Pacers on Feb. 11 moved them into third place in the East. The Cavaliers were sixth after beating the Toronto Raptors on March 6, but that was the night center Jarrett Allen fractured his finger.

Since Allen was injured, Cleveland is 5-8 over its past 13 games. They won four of the first seven games without Allen but are allowing 116.3 points during a 1-5 slide that has dropped them 2 1/2 games behind the sixth-place Raptors entering Friday.

The latest setback was Thursday’s 131-107 loss to the Atlanta Hawks, who moved within two games of the Cavaliers. Cleveland trailed by as many as 33 and allowed 17 3-pointers. It was the ninth straight game Cleveland allowed at least 47 percent shooting from the field and the 11th time since Allen was injured.

“Defensively, I just don’t think we played with enough force,” Cavaliers coach J.B. Bickerstaff said. “Obviously they’re a high-powered offensive team, but at some point you have to hold your ground and pick something to take away and I thought tonight we gave up everything.”

Besides missing Allen, rookie Evan Mobley sat out his second straight game with a sprained left ankle and will be out again Saturday. Without Mobley and Allen, Cleveland’s starting frontcourt consisted of Moses Brown at center flanked by forwards Caris LeVert and Lauri Markkanen, and that trio combined for 32 points Thursday.

Cedi Osman had 21 points while Darius Garland added 18, but the Cavaliers also shot 43 percent and missed 23 of 30 3-point tries.

Since the slide, New York is a respectable 9-5 over its past 14 games. However, the Knicks were officially eliminated from playoff contention when Atlanta beat Cleveland.

The Knicks saw a four-game winning streak end Wednesday when they allowed 54 percent shooting and 66 points in the paint during a 125-114 loss to the visiting Charlotte Hornets.

With the Knicks being eliminated, the focus could turn to increased playing time for younger players Obi Toppin, Immanuel Quickley and Miles McBride to supplement continued production from RJ Barrett. Barrett scored 25 points and is averaging 25.7 points since the All-Star break.

If the Knicks give more time to their younger players, members of the trio could cut into minutes for Julius Randle and Evan Fournier. Fournier led the Knicks with 30 points Wednesday and Randle added 21 before denying an unconfirmed report from WFAN stating the forward wanted to be traded.