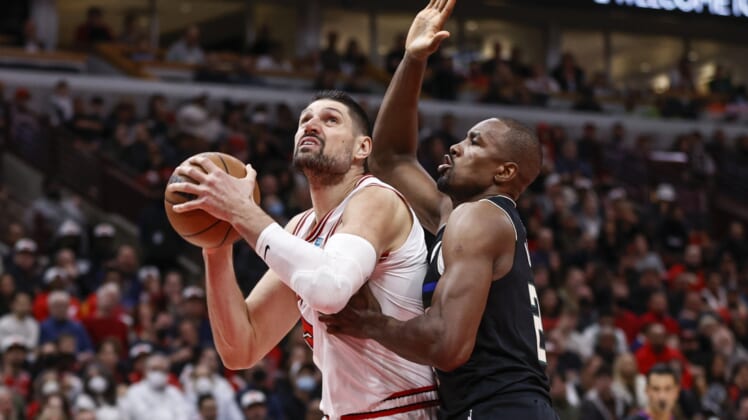 The Chicago Bulls hope to continue a home-friendly trend while at the same time taking advantage of a tired opponent when they host the Cleveland Cavaliers on Saturday night in a game with serious Eastern Conference playoff ramifications.

Two of the teams in a mad scramble for the top six spots in the East, the Bulls and Cavaliers will be meeting for the third of four times this season.

The clubs will complete the season series, which could turn into a critical tie-breaker in the tightly contested race, on March 26 in Cleveland.

The Bulls are coming off a 114-108 win at Detroit on Wednesday, snapping a five-game losing streak that had come after a six-game winning run.

Bulls big man Nikola Vucevic returned to the lineup from a hamstring issue in the Detroit game, and now Chicago is hopeful of getting key reserve Alex Caruso back from a broken wrist.

Caruso practiced Friday and stamped himself ready to go after a seven-week recovery process.

“We’re close,” he said after practice. “Wake up (Saturday), hopefully no soreness that will hold me back and go from there. We have to continue to check the boxes.

“As far as shooting and passing and dribbling, I’m good with all that stuff.”

Chicago will be playing at home for the only time in a six-game stretch.

Meanwhile, the Cavaliers are one game from returning home as they complete a three-game trip. They split the first two, winning 127-124 at Indiana before coming up short 117-105 at Miami on Friday on the front end of a back-to-back.

The loss to the Heat was Cleveland’s seventh in its last 10 games as it awaits the return of Caris LeVert from a sprained right foot. He has missed eight in a row, but did make the trip and worked out on the court in Miami before the game.

The double-double was Garland’s fourth straight as he continues to play at a level where his coach, J.B. Bickerstaff, now refers to him as a “dominant force.”

“You have to game-plan for him,” Bickerstaff said this week. “Then you have to have a backup for your game plan. When you’re an elite player, you force people to make adjustments to you, and I think Darius is continuing to do that.”

Offenses dominated the first two meetings, with the Cavaliers shooting 55.0 percent in their win, before the Bulls countered with 54.7 percent in their victory. Garland (24 points) and DeMar DeRozan (30) paced the wins.

Depth played a part in both outcomes as well. Cleveland got the better of the bench points 39-16 the first time around, but then saw its reserves held to 24 points and outscored by three in the rematch.