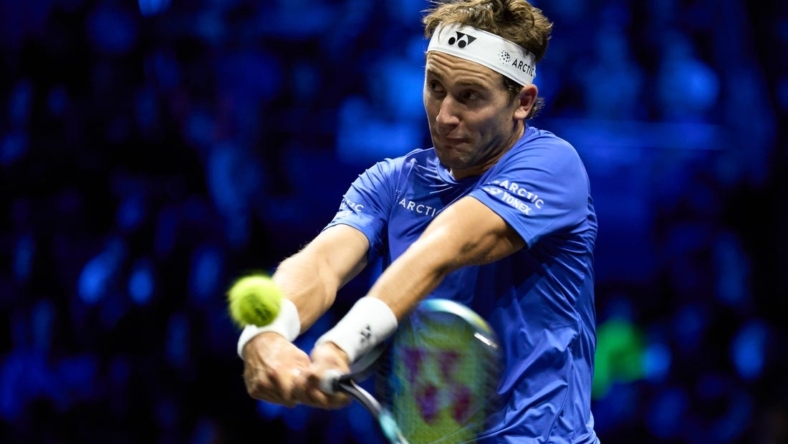 Norway’s Casper Ruud outlasted American Taylor Fritz 6-3, 4-6, 7-6 (6) in round-robin action at the Nitto ATP Finals on Tuesday in Turin, Italy, securing a place in the semifinals.

Ruud, the tournament’s third seed, moved to 2-0 in the Green Group by downing the eighth-seeded Fritz. The group’s other match Tuesday saw Canadian fifth seed Felix Auger-Aliassime beat top seed Rafael Nadal of Spain 6-3, 6-4, ensuring 0-2 Nadal will not advance out of the group stage.

Ruud led Fritz 3-0 and 5-1 during the third-set tiebreaker before Fritz rattled off three straight points to draw closer. Ruud won the next point but the American saved two match points to tie it 6-6.

“Only a couple of points decide a match like this,” Ruud said after the match. “Fortunately for me, they went my way at the end. I was 5-1 up in the tiebreak and he turned it around. He played some great points and hit some incredible winners to come back to 6-6. I hesitated a little bit at 6-4, but that is normal.

“There was a lot at stake … I am sad for Taylor, but I was so happy to see (his) last forehand sail long. To book my place in the semifinals felt great.”

After losing to Ruud on the first day of round-robin play, Auger-Aliassime bounced back and out-aced Nadal 15-1 en route to a 32-13 edge in winners. He saved all five break points he faced while breaking Nadal twice in four chances.

“I wasn’t sure If I would be here one day or if I could only dream of it,” Auger-Aliassime said of beating the 22-time Grand Slam winner. “The age difference is huge, and it proves what a champion he is and what an example because he is still here at 36, battling against guys in their young 20s. He is a great champion and has a great attitude.”

But Nadal has now lost four straight matches. Since Frances Tiafoe eliminated him in the U.S. Open Round of 16, Nadal has played just one other tournament, losing to Tommy Paul in the Round of 32 of the Rolex Paris Masters.

Auger-Aliassime and Fritz are scheduled to play Thursday in what’s become a win-and-in scenario for both players.

The Nitto ATP Finals are the season finale for the top eight players in the world. After two groups of four play a single round robin, the top two players from each group will advance to a single-elimination bracket.