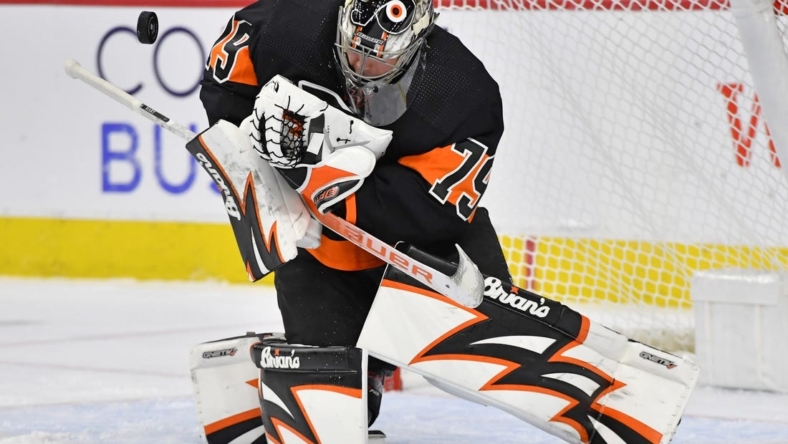 Joel Farabee had one goal and one assist, goaltender Carter Hart tied his career high with 47 saves and the host Philadelphia Flyers defeated the Florida Panthers 4-3 on Thursday.

Gustav Forsling, Josh Mahura and Brandon Montour scored one goal apiece for the Panthers, who dropped their second in a row.

The Panthers went ahead 1-0 when Forsling fired a wrister just under Hart’s arm at 3:41 of the first period.

The Flyers soon equalized when DeAngelo received a backhand pass from Konecny and scored at 6:41.

Florida attacked quickly and took a 2-1 advantage just 1:17 later after Mahura pounced on a rebound and connected.

The Panthers came out aggressive in the second and earned a power play. Despite a flurry of shots, they were unable to capitalize.

Owen Tippett redirected a shot in front at 9:55, but Bobrovsky managed to make the difficult save.

The Flyers then took a 3-2 lead at 10:17 as MacEwen deflected a shot that eluded Bobrovsky.

Hayes soon skated in all alone and had a breakaway shot stopped. But Hayes gathered the puck in the corner and sent a crisp pass to Farabee, who scored for a 4-2 advantage at 11:29.

Marc Staal and Carter Verhaeghe each had strong scoring chances for Florida in the final two minutes of the second, but Hart made the stops.

The Panthers cut the deficit to 4-3 when Montour scored a power-play goal on a backhand shot 36 seconds into the third.

Matthew Tkachuk nearly scored with consecutive shots on goal midway through the third.

In an unusual scene, Laughton tried to clear the puck at 13:49, but lofted it off the scoreboard.

Bobrovsky was pulled for an extra skater in the final 1:30 but Florida couldn’t equalize despite numerous chances.