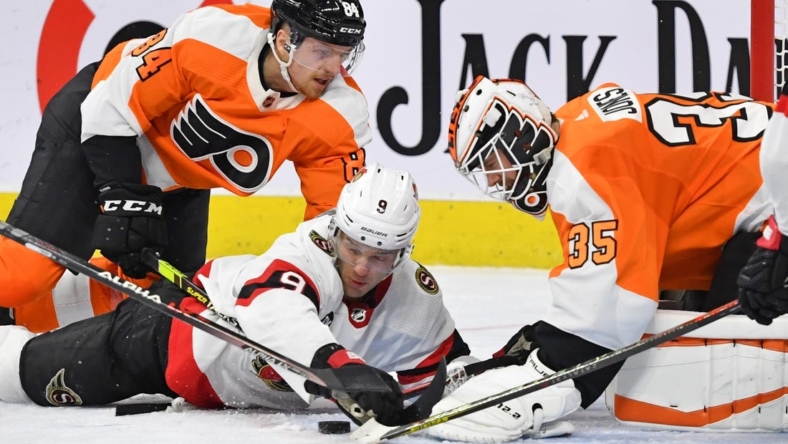 Carter Hart made 33 saves to help the visiting Philadelphia Flyers end a three-game losing streak with a 2-1 win against the Ottawa Senators on Saturday night.

Kevin Hayes and Zack MacEwen scored for the Flyers, who had lost four of five following a 4-1-0 start.

Claude Giroux scored the 300th goal of his NHL career against his former team, and Cam Talbot made 26 saves in his first start of the season for Ottawa, which went 0 for 5 on the power play en route to losing its fifth in a row.

Giroux, who spent his first 15 NHL seasons with the Flyers and was their captain for 10 years, gave the Senators a 1-0 lead at 2:44 of the first period.

Giroux, Tim Stutzle and Brady Tkachuk entered the Philadelphia zone on a 3-on-3 rush, Stutzle slid the puck to Tkachuk on his left, got it back and then centered a pass to Giroux on his right for the redirection.

The Flyers traded Giroux to the Florida Panthers toward the end of last season. After helping the Panthers reach the Eastern Conference semifinals, Giroux signed a three-year deal with the Senators in the offseason.

Giroux has four goals and two assists in a five-game point streak.

Thomas Chabot was called for high sticking Nicolas Deslauriers at 5:12 of the first period and Hayes tipped in a point shot from Tony DeAngelo five seconds into the power play to tie the score 1-1.

Hart made a save on Shane Pinto’s breakaway with 5 1/2 minutes left in the opening period to keep the score tied.

MacEwen gave the Flyers a 2-1 lead at 18:24 of the second period when he scored off a rebound that came out to the slot.

The Flyers nearly extended their lead with 55 seconds left in the second when a shot by Nick Seeler went through Talbot’s pads and grazed the outside of the right post.

Talbot, who was acquired from the Minnesota Wild on July 12, sustained a broken rib in training camp and missed the first three weeks of the season.