Carson Wentz, Quenton Nelson reportedly way ahead of schedule, could start for Colts in Week 1

The Indianapolis Colts gave a wide-ranging timeline of five to 12 weeks for quarterback Carson Wentz and All-Pro guard Quenton Nelson to recover from their recent foot surgeries. They’re reportedly much closer to the short end of that span as they bid to return to the field sooner than expected.

ESPN’s Chris Mortensen reported on Wednesday that Wentz and Nelson could very well suit up for the Colts’ Week 1 matchup against the Seattle Seahawks:

This comes on the heels of plenty encouraging news surrounding the franchise.

So not only does it look like Indianapolis may have unearthed a diamond in the rough in Ehlinger, but Wentz may very well be on time to make his Colts debut when it actually counts.

While Nelson has proven to be an absolutely elite player at his position and seems sturdy enough to overcome just about any bumps and bruises accumulated through a 17-game season, the same can’t be said for Wentz.

An extensive injury history during his tenure with the Philadelphia Eagles cost Wentz tons of playing time. Coming off a disastrous 2020 campaign in which he forced his way out of Philly, it’s bound to be a situation where Wentz wants to shed his injury-prone label and prove he can thrive in a reunion with Reich.

The Colts have one of the most well-built organizations in the NFL, so they’re unlikely to botch Wentz’s return. That said, they need to be patient and bear in mind the long-term vision not only for the years to come, but for this 2021 season in general. 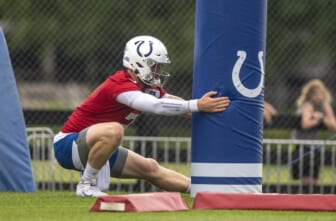 Now that there’s an extra game on the schedule, Wentz has his work cut out even more to last a full season. If Ehlinger or Eason can step up for even a week or two and help the team play winning football while leaning on the Jonathan Taylor-led rushing attack and a solid Colts defense, that could buy Wentz valuable time to heal up a little more.

Of note regarding Wentz’s injury, too: It’s related to a previous ailment, which isn’t the case for Nelson. All the more reason to exercise more caution if it can be helped.

Plus, the AFC South is among the worst divisions in the NFL, so as long as Wentz doesn’t miss more than two games and plays at the level he did under Reich’s watch when they shared time on the Eagles, Indianapolis could still be well within the playoff hunt and the race for the division crown.