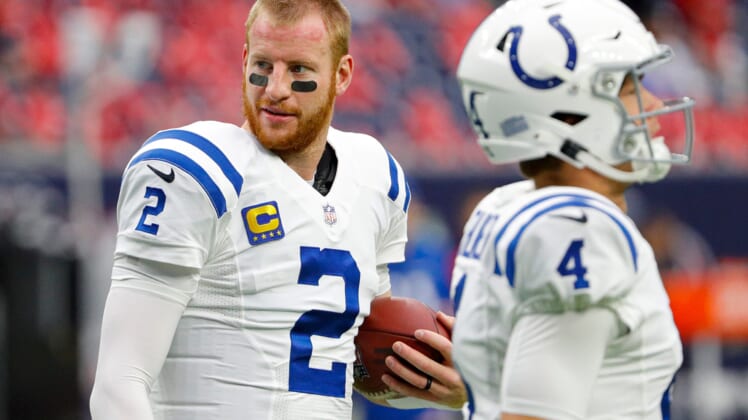 Indianapolis Colts quarterback Carson Wentz was added to the COVID reserve list on Dec. 28. Then, the league adjusted protocols later that day, increasing the chances for Wentz to come off the list by Sunday’s game.

On Saturday, Wentz was activated off the reserve list, meaning he just needs to clear COVID protocols tomorrow to be in line to play. The Colts are playing the Las Vegas Raiders this week as they aim to position themselves for one of the remaining playoff spots in the AFC.

Colts were prepared to add a retired QB, if Carson Wentz couldn’t go

It had been speculated that Wentz wasn’t going to be able to return in time for Sunday, but that was before the league changed their protocols regarding vaccinated and unvaccinated individuals. They even went back to a familiar friend.

Before Wentz was activated, the Colts reportedly followed in the footsteps of the New Orleans Saints, by gauging the interest of one of their retired players, Philip Rivers about a potential comeback. We know now, Rivers never came out of retirement. In hindsight, they may not need to add anyone with Wentz potentially getting back in the starting lineup tomorrow, without missing a game.

Bringing in a vet such as Rivers would have created an odd scenario, provided Wentz clears protocols tomorrow. Rivers made the right decision by staying retired, for now. If not, he may have just been relegated to a backup role, which likely wouldn’t get him off the couch.

Without Rivers or any other retired quarterbacks, the Colts were set to start rookie sixth-round QB Sam Ehlinger in one of their biggest games of the year. While that ultimately still could happen if Wentz can’t clear protocols once again tomorrow, it appears the Colts are prepared either way. Though, they’d much prefer to have their original starting QB for the 2021-22 NFL season.