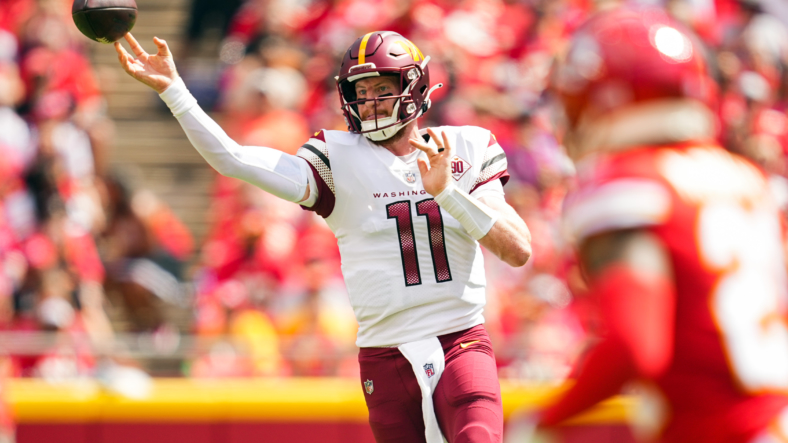 There was already enough intrigue with Carson Wentz beginning a new season with a new franchise for the second consecutive year after his trade to the Washington Commanders. After coming just one win against the Jacksonville Jaguars away from clinching a playoff berth while with the Indianapolis Colts in 2021, the coach he had won a Super Bowl with in Philly already wanted to move on.

But now that Wentz has once again gotten a change of scenery, he’s hoping to start the 2022 season with a win. He’ll immediately get a chance to exorcise one of his demons from last season, once again facing off with Josh Allen and the Jaguars defense on Sunday in Week 1, only now under much different circumstances.

Still, the irony of Wentz facing the exact team he was unable to beat last season as he tries to prove himself among his new teammates isn’t lost on the seventh-year pro.

Related: Washington Commanders’ Antonio Gibson: I feel like I am one of the best running backs in the league

Carson Wentz faces a much different Jaguars team in 2022

As Wentz said, last year was last year. Yet, that might not work in his favor heading into a new season. As motivated as Wentz is, the Jaguars have a full 46-man active roster on gameday who also have a big chip on their shoulders after being one of the worst teams in football a season ago.

Gone is Urban Meyer, replaced by a Super Bowl-winning coach. Ironically enough, it’s Doug Pederson, the very same coach who saw Wentz and all his strengths and weaknesses for all of five seasons with the Eagles. In those 68 games together, the duo went 35-32-1 in regular season play. Both the coach and the player know each other’s tendencies, setting up a spicy matchup on Sunday.

As much as Wentz can play back the tape on the Jags from a season ago, they now have a new defensive coordinator in Mike Caldwell, formerly the linebackers coach for the Tampa Bay Buccaneers. You can bet he’ll be dialing up the pressure, finding creative ways to put No. 1 overall pick, Travon Walker, in a position to succeed.

Aside from Walker, he also has another pet project in fellow rookie first-round pick Devin Lloyd. Wentz has never seen either of these players in the NFL to this point. As a vet, he may get the better end of the battle, but he may also underestimate their abilities until they’ve proven their mettle.

Not only are the Jags under stronger leadership, they have also added several playmakers on both sides of the ball. It shouldn’t all fall on the shoulders of Wentz as he takes on the Jaguars, but as it goes in the NFL, the focus always centers around quarterbacks after a win or loss. That’s just how it works.

As far as what Wentz says is needed in Week 1? It’s pretty simple.

Wentz started his Colts tenure off by losing 28-16 to the Seattle Seahawks in 2021. He faces the Jaguars on Sunday as 2.5-point favorites.