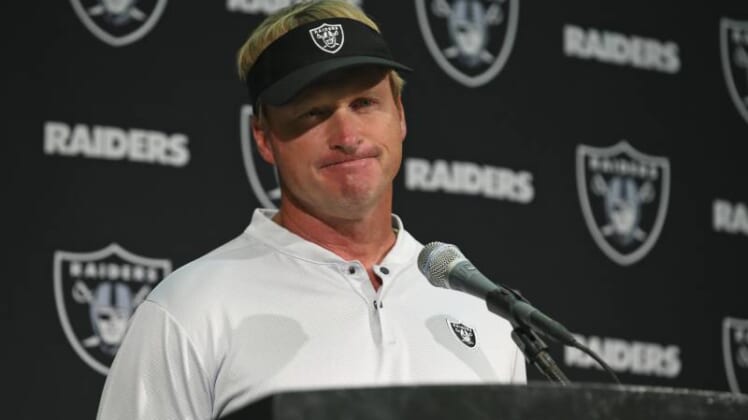 The Oakland Raiders played better the first half Monday night keeping the Rams in check. But in the second half, the efforts during the early part of the contest were lost in questionable play calling and a veteran quarterback who looked anything but confident.

In the week leading up to the Raiders 33-13 loss to the Los Angeles Rams on Monday Night Football, when franchise quarterback Derek Carr was asked about his preparation for his Week 1 opponent, the affable signal caller said he was ready.

Carr looked solid until late in the second half when he threw two key interceptions against the Rams.

“Oh yeah, 100 percent ready,” Carr said earlier in the week. “Like I said, I’ve said this from the beginning. I knew when Coach Gruden came in, the demand. I knew the differences that there were going to be. Obviously, you see our team changing.”

What didn’t change with the arrival of Gruden and Carr’s first game in his new offense was the outcome. Not only did the Raiders lose, but Carr seemed unsure, unaware, and even lost at times. It’s hard to deny Carr isn’t the same quarterback he was before breaking his leg in Week 16 of the 2016 season. The swagger and confidence – and lack of fear – seem to be gone. Sure, he was injured last year and played in one of the league’s worst-called offenses. Still, the only question is: will it change?

The Raiders wasted a record-breaking night by tight end Jared Cook who finished with nine catches for 180 yard setting the new receiving yards mark for an Oakland tight end. Cook looked to be a big part of the game plan as the Rams field one of – if not the – best defenses in the entire NFL. LA’s only weakness is their linebacking corps. This allowed Cook to run middle routes and to find openings often. Cook may have had more catches but Carr threw a pick on an attempted pass to Cook that was returned by Marcus Peters for a touchdown.

“Jared being one-on-one, we know what he can do,” Carr said after the game. “I just made a bad throw. So, that’s all it was.”

Carr himself looked like Jekyll and Hyde. Although he threw for 303 yards on the night, completing 29-of-40 passes, it was his three interceptions which made the game appear to be a wholesale blowout, which it wasn’t. Very rarely can you watch a game and pin most of the loss on one player but that’s what happened on Monday night.

According to Pro Football Focus, Carr was pressured on 12 of 42 dropbacks in the game and completed five of 11 attempts for 52 yards and two interceptions.  Carr was sacked once and had a 20.1 passer rating when pressured, according to the statistics service.

“He did some good things tonight but obviously there were some critical errors we have to eliminate,” Gruden said of Carr’s struggles on Monday. “He knows that. You know that. We all know that. One of them wasn’t his fault as he got fooled by one of our own receivers and I gotta do a better job of coaching as this one goes on me.”

The Raiders defense looked very good – in spots. The play of the linebacker corps was a highlight. The highly-praised rookie defensive lineman – Mo Hurst, PJ Hall, and Arden Key are clearly learning on the job and their impact minimal this first time out.

Gruden may have missed some things in his first game back on the sidelines in a decade, but his playcalling overall showed he’s in tune with today’s game. He let his talented offensive line work and in the first half ran the ball well behind Marshawn Lynch. Yet it was the inability of Carr and the staff to get the ball down the field that hurt.

The Raiders three top receivers – Amari Cooper, Jordy Nelson, and Seth Roberts – were targeted just nine times and combined for just five receptions. Yes, the Rams have a good defensive backfield but the Raiders had no answer to get the ball to their receivers.

“I don’t think it was a smashing debut by any sense,” Gruden said. “We need to get more pass rush, and that goes for all of us, but like I said at the beginning, I’m proud of the way our guys competed to the end and we’ll have some more information for you once we study the tape.”

Watching tape for the Raiders coaching staff will be a good exercise and one Derek Carr may want to employ as well. At this point, he needs all the help he can get. He’s got the talent and the mind.

Now, he needs to find consistency. And find it fast.