Carr Strikes Back at Critic and That’s a Good Thing 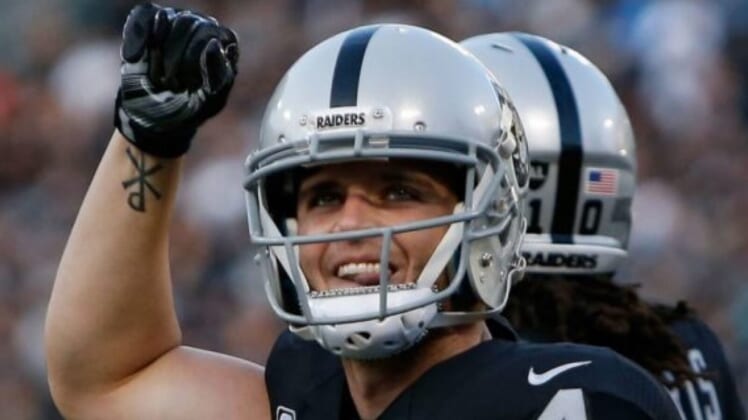 The NFL world is abuzz after Raiders quarterback Derek Carr fired back at ESPN’s “First Take” host Max Kellerman who questioned his ability and – perhaps more importantly – his desire and character.

I played football in high school briefly. I was slow, soft, and just didn’t have the desire to play a game which I just wasn’t built to play – physically or mentally at the time. So I don’t know what it’s like to go from cradle to adulthood playing the sport. That includes the time, hard work and determination it takes to become a professional. Yet I pass judgment on players and their performance all the time. Whether in this space or on our CBS Sports Radio show, it’s part of what I do.

One area I try not to venture into is really questioning a player’s character or desire to play the game as a professional just because he or his team may be struggling. Sure, there’s been some less than desirable characters out there and we in the media comment on them but you always try and separate the man from the guy on the field when possible. They get paid a lot of money to play the game but that doesn’t mean they’re cowards or just collecting a paycheck when they’re losing.

That’s why Derek Carr’s Twitter defense of himself this week was something I was glad to see.

At a time when the political and social discourse in our nation continues to find a new rock bottom almost daily, it’s hard to watch what transpires on a daily basis and not think it’s debasing our culture and us as people. Decorum is dead and it seemingly has become a free for all each and every day. Criticisms often become less focused on performance and often more personal. It’s a national malaise and one that has reached Carr’s doorstep. Although he commented this time, I am sure he’s endured it over and over again but this time he chose to speak up.

I’m not here to call out Smith (who didn’t really say anything about Carr) or Kellerman or to debate their value. They’re on a big stage and have worked for years to get there. In many ways, this isn’t even about them. It’s more about why we pick the points that we do in order to make a point. Perhaps Smith and Kellerman don’t believe Carr has the ability to be the quarterback the Raiders and many of us believe he can and will be. That’s a fair debate and has been part of sports since scribes and other journalists have covered those who play the game. Yet to question the character and fortitude of a player who you haven’t spent time watching or covering regularly seems to be out of line.

Kellerman, who quickly asserted Carr had taken plays off and given up during the challenging 2018 season, maid the point he felt Gruden was ready to move on and Oklahoma underclassman Kyler Murray could be a great choice. It might have been quick and slight, but for Kellerman to make the assessment was what apparently motivated Carr to openly fire back.

?it’s because I blocked them both for talking trash about our team. Those 2 clowns don’t know anything about this game. Would love to actually sit and break down film with these two on tv just to show their viewers how incompetent (lacking qualification) they are about our game.

Carr then, in jest, I believe, challenged the two to a “fight” in the octagon calling on UFC head Dana White to set something up.

@ufc @danawhite hey how do I challenge a couple of these clowns on tv to a fight? I think we should start a business together. Where pro athletes can challenge some of these people to an octagon fight until they give us an answer…. You don’t know me… stop lying.

Carr has had a cool head throughout a barrage of unfair and very personal attack related to his play last season. The Twitter trolls and keyboard tough guys like to target him because he’s even-keeled and usually doesn’t react. This time he did because Kellerman so easily accused him of quitting. There’s perhaps no deeper and more personal insult than that when it comes to a professional athlete.

The reaction to Carr’s response has been interesting. The entire season I heard some in Raider Nation criticize Carr for being to0 “soft” or for not being a fiery type of screamer on the field. Yeah, like Philip Rivers? They forget the guy has played through injuries including a broken bone in his back.

A broken bone in his back.

Most of those who throw rocks at him couldn’t get off the couch or out of bed with an injury like that. But Carr played NFL games with the injury. Yeah, he’s “soft.”

Other reactions have been to lecture Carr that he should just blow it off, ignore it, or criticized him for defending himself by using his strong faith against him. So which is it? Do you want Carr to be a strong leader and be “tough?” Or do you want him not to be? Apparently, some won’t be happy either way the quarterback goes.

Carr has done what I would have done if someone questioned my character. He had every right to and should be applauded for holding Kellerman’s feet to the fire. That doesn’t mean Kellerman or any other journalist doesn’t have the right to analyze and criticize performance in the right context. We all do that and it’s part of what fans and viewers want to see and here. They can agree or disagree which is what the media is about. It presents facts and opinions and is supposed to let you decide your own take on the player or subject.

After Carr came out publicly to challenge Kellerman, the host didn’t back down further fanning the flames. But it appears Carr is ready to move on. Perhaps they can sit down and have a conversation in the future that leads to greater understanding of why what Kellerman said was both wrong and without merit.

What Carr ends up doing with the Raiders and the rest of his career is an unwritten chapter of the story. What is certain is the discourse in and around sports – like it is in politics – should change. I, for one, am glad Carr challenged the status quo.