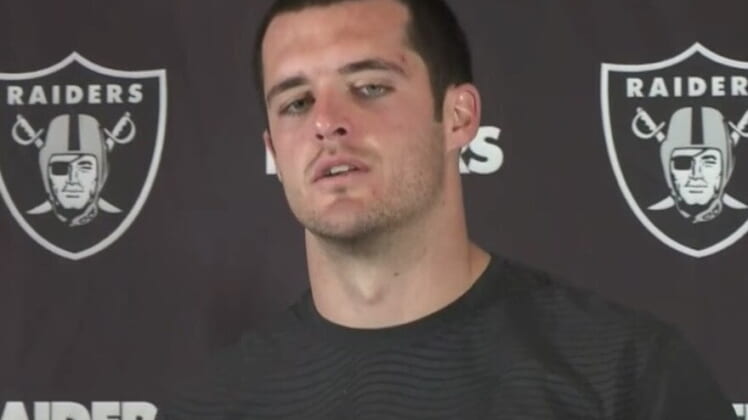 The Oakland Raiders franchise quarterback Derek Carr has nothing but high praise for Jack Del Rio after the coach is fired immediately after the team’s final game of the season.

Moments after learning of his coach Jack Del Rio‘s firing after a 30-10 loss the Chargers, all-everything quarterback Derek Carr broke down and cried it out. The emotional leader wept after learning of Del Rio’s fate before pulling himself together to address the media after his coach’s display of fortitude and grace in announcing his own dismissal.

I understand the hurt. Trust me… I can promise you this though. We will fix our problems, fight, & work so that we are better next year!!

Carr, who is always calm and collected no matter the situation, was shaken but kept his composure – like his coach.

“We are upset at ourselves,” Carr continued. “We understand the business part of it, but as players, I talked with Khalil (Mack), our job is to come back better and hungry. We have been through some hard times together and this is right up there with it.”

Carr struggled this year under former Offensive Coordinator Todd Downing – a coach Del Rio fought to promote after firing Bill Musgrave last season. Musgrave and Carr helped field one of the NFL’s top offenses in 2016 only to see a massive fallback in 2017 under the inexperienced Downing.

It hurts. It is a sucky thing because we talked about it earlier this year. He is family. – Derek Carr on Jack Del Rio’s firing

Carr’s own performance suffered this year as the possible preseason MVP candidate sustained a back injury and failed to find his form in Downing’s offense. After for passing near 4,000 yards with 28 touchdowns and just 6 interceptions in 2016, Carr tossed 22 touchdowns in 2017 but his turnovers more than doubled. The once high-powered Oakland vertical offense never got on track with a lack of focus and a rash of confusion for the Raiders offensive team.

“We weren’t good enough for him,” Carr said of the Raiders disappointing season and its impact on Del Rio’s fate. “We have to take our ownership as players. That’s where we are right now.”

Although Carr was not asked about Del Rio’s possible replacement in Jon Gruden, many around the league believe the coach turned television analyst’s interest in returning to the sidelines has a lot to do with Carr. Many believe Gruden’s ability and desire to work with the quarterback could make a big difference.

For now, Carr is focused on dealing emotionally with what happened yesterday in Los Angeles. He’s been open about how much he admires Del Rio and what he’s meant to him an his family playing for him.

“The wound is still fresh, but as we move forward it will scar over. It will be there, but you have to move on.” Carr said.