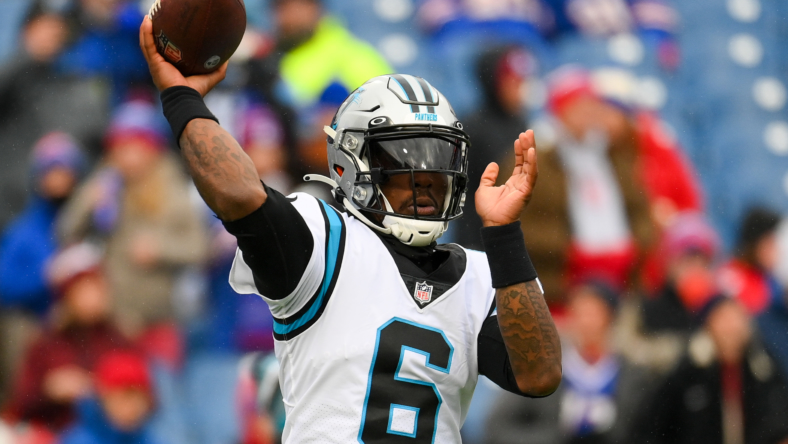 Very rarely will you see a play like the Carolina Panthers completed near the conclusion of their battle with their NFC South division rivals on Sunday. Taking on the Atlanta Falcons down by six with just 23 seconds to go, Carolina QB P.J. Walker managed to escape pressure to uncork a deep shot to a streaking D.J. Moore for a 62-yard Hail Mary touchdown.

Unfortunately, the Panthers would miss the extra point on the next play after being penalized for excessive celebration, sending the game into overtime instead of what should have been a game-winning touchdown.

But that doesn’t make Walker’s throw any less impressive.

Giving us shades of Aaron Rodgers here on the Hail Mary toss, Walker’s ascension has been much different. The 5-foot-11 QB is a former XFL player who is now getting another chance at his NFL dream.

With the Panthers having to overcome injuries to three of their quarterbacks, with Baker Mayfield, Sam Darnold, and Matt Corral all dinged up, it was Walker who first got his opportunity at the starting gig in Week 6.

He hasn’t looked back since. Walker then led an improbable victory over the Tom Brady-led Tampa Bay Buccaneers, where he appeared to secure the starting role for the foreseeable future. Now his latest gutsy performance against the Falcons just might galvanize the locker room more than we’ve seen in Carolina this season.

While the Panthers weren’t able to come away with the win here, they have shown more resilience in their past three matchups since making the head coaching change from Matt Rhule to Steve Wilks. While their season is still in the tank, the players still on the roster are battling for their jobs next year.