Carolina Panthers right tackle Taylor Moton is staying in Charlotte for the long haul, agreeing to terms on a four-year, $72 million contract extension with $43 million guaranteed at signing, per ESPN’s Adam Schefter.

Moton has steadily developed into one of the game’s premier right tackles since the Panthers drafted him in the second round in 2017 out of Western Michigan. He was Pro Football Focus’ 13th-ranked offensive tackle in 2020.

Originally given the franchise tag designation for 2021, Moton had until 4 p.m. ET on Thursday to reach a multi-year extension. The initial buzz out of Carolina was that a deal wouldn’t get done, but evidently, the two sides found enough common ground to strike an accord.

Well, it’s nice to have a clear franchise cornerstone locked in at a key position. Right tackle may not be as highly valued as those who often protected right-handed quarterbacks’ blind sides, but teams are stockpiling pass-rushers more than ever in an era of the NFL that skews in favor of elite passing offenses. Moton is outstanding and deserves his big payday.

Whatever the structure is for Moton’s deal, he may eat into a significant chunk of Carolina’s salary cap space for 2022, which currently stands at $48 million without including his contract.

Panthers QB Sam Darnold is due to be the highest cap hit for the Panthers next season at over $18.8 million, which is actually reasonable in the inflated market at his position. Darnold may not even be under center for Carolina next season, though, depending on how he fares this year. If his turnover-plagued tenure with the New York Jets carries over, this may be his last shot at a starting gig.

Other key free agents for next offseason include Darnold’s ex-Jets teammate Robby Anderson. The speedy wide receiver is coming off his first 1,000-yard campaign, and may be out of the Panthers’ price range. 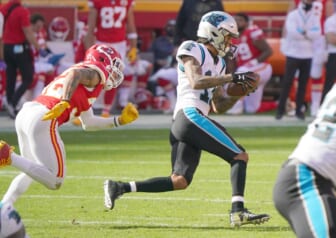 Overall, though, Carolina is done a fine job building a viable roster through the draft, and definitely appeared to upgrade the talent at the most important position by moving off Teddy Bridgewater in favor of Darnold.

An offense is often only as good as the line up front. Moton is a big piece to that puzzle, but Pro Football Focus rated the Panthers’ offensive line 18th in the NFL last season. They’ll need to be better than that in front of Darnold and star tailback Christian McCaffrey if Carolina is meant to compete for the playoffs in the NFC.

Moton’s contract was a steep but smart investment for the Panthers to make, and although cap space might be tight in 2022, things really open up the following year. Matt Rhule’s program could really take off in the next couple years, with Moton being a strong contributor to the cause.