Sam Darnold is suiting up for the Panthers’ preseason game Saturday and Carolina coach Matt Rhule plans to have the quarterback debut, if only for one series.

Darnold could play “one or two” series against the visiting Baltimore Ravens, Rhule said, but a final decision isn’t likely to be made until gametime.

Darnold was acquired from the New York Jets in an offseason trade and replaces quarterback Teddy Bridgewater, who landed with the Denver Broncos. 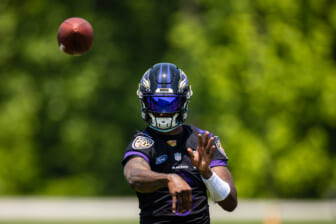 The Panthers won’t know the status of two starters injured Thursday — wide receiver D.J. Moore and pass rusher Brian Burns — but neither is likely to suit up for the weekend exhibition.

Burns watched practice with a wrap on his shoulder and Moore left a joint workout with the Ravens on Thursday with stiffness in his back.