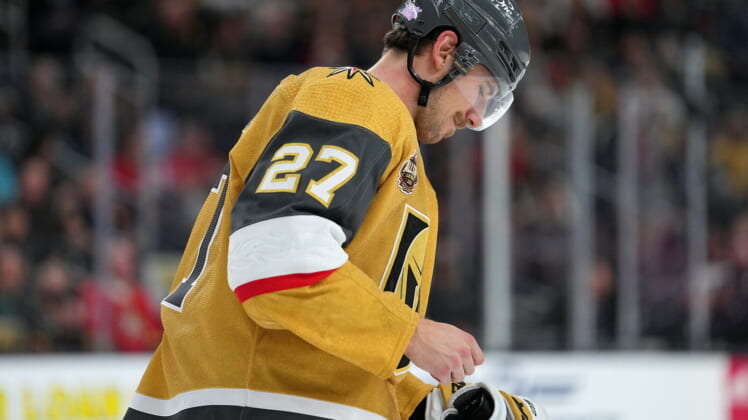 The Las Vegas Golden Knights’ winning streak came to an end against the Carolina Hurricanes as they fell 4-2. The Hurricanes took a 2-0 lead in the first period that would be erased in the second, leaving the game tied entering the final frame. However, the Hurricanes would prove to be too much to handle as they controlled the third period and managed to secure the victory.

The goalscorers for the Golden Knights included Brett Howden and Shea Theodore. The two goals came in quick succession early in the second period during a period of the game where the Golden Knights had their best stretch of sustained pressure.

Shea Theodore left the game in the third period after falling awkwardly into the boards. He caught an edge on the ice and hit the boards in an awkward manner before going straight to the dressing room. While it remains to be seen how serious his injury is, it’s not the news you want for a team already missing plenty of players. There was no update provided by head coach Peter DeBoer after the game.

It was an inability to create much in the offensive zone that ended up being the deciding factor in the game tonight. The Golden Knights couldn’t get scoring chances when they needed them most and that let the Hurricanes decide the outcome of this game.

“I’m more disappointed 2-2 going into the third, chance to get points and we didn’t do that,” said DeBoer.

When they face off against the Red Wings on Thursday, the Golden Knights are going to need to find a way to create more. The absence of Jonathan Marchessault tonight was noticeable as he’s been of their best players all season and leads the team in goals. He entered the COVID-19 protocol earlier today.

The Golden Knights have shown a great level of resilience so far this season, first in fighting through their many injuries and then after by overcoming a couple of multi-goal deficits. Tonight they did both as they’re still missing many key players and managed to comeback from a 2-0 hole to tie the game early in the second period after goals from Shea Theodore and Brett Howden.

While the Golden Knights effort wasn’t good enough to win the game, the will they showed by fighting back against a strong team in the Hurricanes tonight was impressive. Efforts like this will keep the Golden Knights competitive until their roster is fully healthy, at which point they will be a juggernaut if all things go as planned.

“I don’t think anyone is going to feel sorry for the Vegas Golden Knights in this league,” commented captain Mark Stone after the game, “we have to find ways to win.”

While games like tonight didn’t result in two points, they are bonding moments for teams that they can look back on at the end of the season. The Hurricanes are one point back of the Metropolitan Division lead and have been red-hot to start this season. The fact that a short-handed Golden Knights team managed to stay in this one to the end is a good sign.

While his goals-against-average is slightly higher than his career average, Robin Lehner has been very good all season and was great once again tonight. The Hurricanes outshot the Golden Knights by a significant margin but Lehner’s big saves kept the game close.

The Golden Knights play their next game on Thursday against the Detroit Red Wings at T-Mobile Arena. The puck drops at 7 PM Pacific Time.